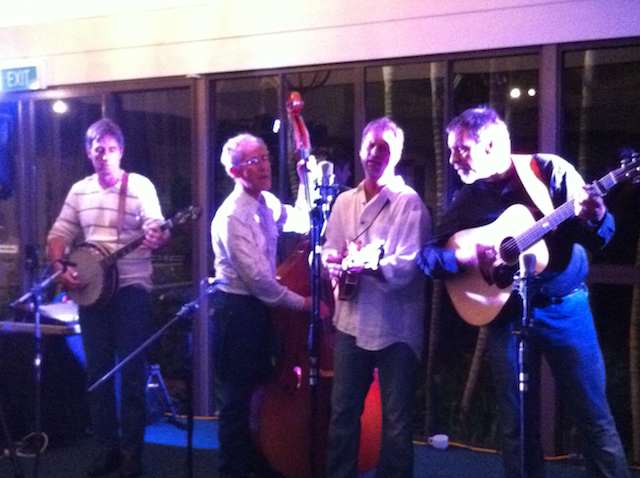 Last night I was one of around 100 or so people packed into the dining room at Tranquil Park Resort at Maleny in South East Queensland. This is the site for the 4th Australian Banjo Conference hosted by Peter Nahuysen of Bellbird Banjo fame. The conference itself has attracted some 55 banjo players from across Australia (one could feel some sympathy for the residents of Maleny) but that was not the primary reason for the gathering last night. Ross Nickerson, the principal instructor for the conference brought his USA based band X Train to the camp and put on a concert for the conference delegates and the local community. What a concert is was. This was a night of some of the world’s best bluegrass featuring right here in Australia. The band has been on the road for some five weeks taking in appearances in New Zealand and Australia with Maleny marking their last in Australia. Peter Nahuysen announced at the end of the concert, that there would be more of the same next year in Maleny.

X-Train featured Peter McLaughlin on guitar and vocals, Ross Nickerson banjo and vocals, Mark Miracle on mandolin and vocals and Bob Denoncourt, bass and vocals. These are four very well versed players whose musical skills reduced the house to complete silence at times and overwhelming applause at other times.

The band is based in Arizona, Ross Nickerson’s original home however he now lives in Florida. Bob, Peter and Ross all have eastern roots but Mark Miracle was born in the Arizona desert and still lives right in the middle of it. Lots of Cactus at his house, he says.