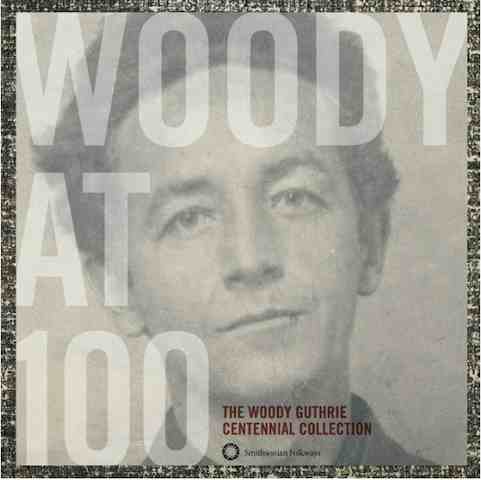 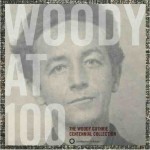 Below you can see the behind-the-scenes-mini documentary “The Making of Woody at 100: The Woody Guthrie Centennial Collection from Smithsonian Folkways”. Folkways archivist Jeff Place and sound production supervisor Pete Reiniger speak about the experience of compiling the Centennial Collection and connecting the “links in the chain” for contemporary folk artists whose roots lie in the music of Woody Guthrie.

In honor of the Woody Guthrie Centennial, a year-long celebration of Woody’s 100th birthday, Smithsonian Folkways presents an in-depth commemorative collection of songs, photos and essays on one of America’s most treasured 20th-century icons.

‘Woody at 100: The Woody Guthrie Centennial Collection’ is a 150-page large-format book containing three CDs with 57 tracks, including Woody’s most important recordings such as the complete version of “This Land Is Your Land,” “Pretty Boy Floyd,” “Pastures of Plenty,” “Hard Travelin’,” “Jesus Christ,” “I Ain’t Got No Home in This World Anymore,” and “Riding in My Car.” The set also contains 21 previously unreleased performances and six never-before-heard original songs, including Woody’s first known — and recently discovered — recordings from 1939.

The only CD of Guthrie’s children’s songs coinciding with the Woody Guthrie Centennial (www.woodyat100.com), ‘Little Seed’ releasing July 10th pays tribute to the legendary songwriter’s uncanny ability to inhabit both the perspective of a loving, protective parent and the voice of a freewheeling child. The album includes thoughtful versions of children’s songs “Riding in My Car,” “Grassy Grass Grass,” and “Bling Blang.” Mitchell also shares her version of “This Land Is Your Land,” Guthrie’s signature song that many people consider a second national anthem.

Stream “This Land Is Your Land” and “Bling Blang”: http://goo.gl/XMxoK

Woodrow Wilson “Woody” Guthrie (1912–1967), who would have turned 100 on July 14, 2012, wrote songs that became the soundtrack of an era and permanent fixtures of American identity. His early Dust Bowl ballads, along with more than 3,000 work songs, union and labor songs, political and philosophical songs, anti-war songs, anti-Nazi songs, love songs and children’s songs, marked the pulse of hard-hit people in times of economic depression and war. Many have embraced “This Land Is Your Land” as America’s second national anthem. Woody was ordinary, yet extraordinary — a traveler, itinerant worker, radio performer, military enlistee, thinking man, gifted visual artist, a husband and father, and prolific writer who left his mark on music, culture and politics. He struggled with family tragedies, poverty and personal demons.

More about ‘Woody at 100: The Woody Guthrie Centennial Collection’ 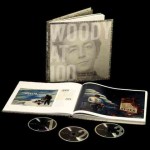 Richly illustrated with photos, artifacts and Woody’s visual art and lyrics – plus extensive essays on Guthrie and his songs – ‘Woody at 100’ commemorates and displays the genius of one of the greatest songwriters, musicians and visual artists of the 20th century.

The book features essays by co-producers Robert Santelli, executive director of the Grammy Museum and author of “This Land Is Your Land: Woody Guthrie and the Journey of an American Folk Song,” and Jeff Place, Grammy-winning archivist for the Smithsonian Center for Folklife and Cultural Heritage and producer of several Woody Guthrie collections and exhibitions.

Four of the unreleased performances, including original songs “Skid Row Serenade” and “Them Big City Ways,” are Woody’s earliest known recordings, made in 1939 while he was working for KFVD radio station in Los Angeles. The set also includes a medley performed in 1940 on Lead Belly’s WNYC radio show. The book offers an extensive biography of the artist and background information on each track.

About the Centennial (courtesy www.woody100.com)

Woody Guthrie was born on July 14th, 1912, in Okemah, Oklahoma. Over the decades, his songs have run around the world like a fast train on a well-oiled track. They’ve become the folk song standards of the nation, and also known and performed in many languages throughout the world. “Pretty Boy Floyd,” “Pastures of Plenty,” “Hard Travelin’,” “Deportees,” “Roll On Columbia,” “Vigilante Man” and “This Land Is Your Land” are among the hundreds of his songs that have become staples in the canon of American music.

The GRAMMY Museum is partnering with the Guthrie Family / Woody Guthrie Publications, Inc., and the Woody Guthrie Archives to create the Centennial celebrations. The year-long celebration will include a host of concerts, programs and events taking place throughout the country and across the pond.

Woody100.com is a joint effort of The Grammy Museum, the Woody Guthrie Archives and Woody Guthrie Publications, created as a hub for all upcoming activities taking place across America and around the world, throughout 2012.