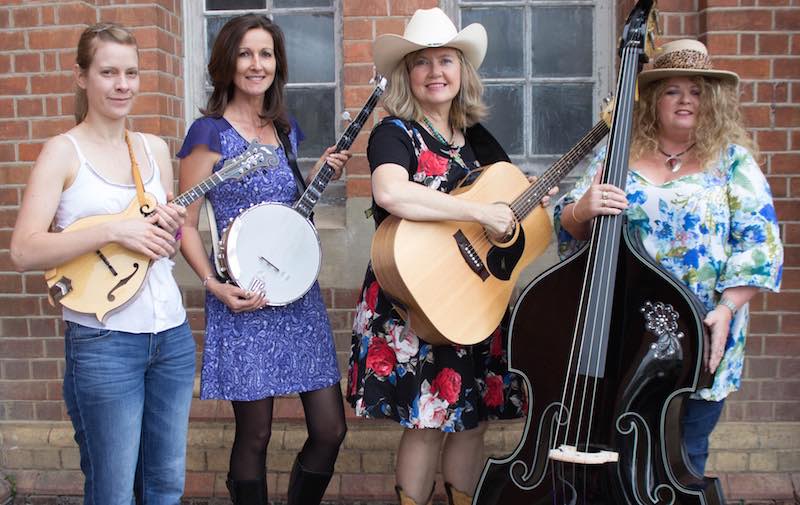 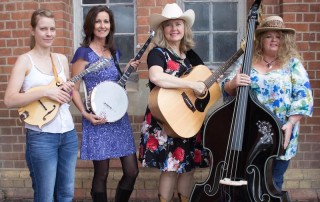 Wayward Angels is a four-piece female bluegrass band who have been taking their style of bluegrass with sweet harmonies to Brisbane audiences since 2013.

The band comprises Kay Armstrong on banjo, Jody Bell on mandolin, Brenda “Lee” Kelly on guitar and Anne-Marie Lawton on double bass. The responsibility for singing is shared between them. This allows them to bring their individual vocal strengths to bluegrass, old-timey and alt-country covers and originals.

Anne-Marie grew up listening to country music and watching “Hee Haw” on TV and first heard a banjo played by Roy Clark and she loved the sound. On impulse, she bought a banjo and started having lessons. This gave Anne-Marie her first taste of bluegrass music, which has been her focus ever since.  She plays upright double bass with the Wayward Angels and plays guitar and ukulele with a recently formed group based in Redcliffe, stylishly named The Mullet Gut String Band.

Brenda was introduced to the world of the Carter family and Johnny Cash from a young age. With regular sing-a-longs at home her musical family made sure that “the circle was never broken”.   Brenda is a singer songwriter who plays guitar and ukulele. She likes to write about people and stories of Brisbane and beyond and previously was a semi-finalist in the Tamworth Songwriting Awards.  She also performs as a solo artist and was a member of musical duo “Arton Hillbillies”.  Brenda is happy to have met three other Wayward Gals, who each bring their own recipe to the musical menu of the Wayward Angels.

Jody, inspired by the creativity and virtuosity of Chris Thile and the Punch Brothers, bought her first mandolin and began teaching herself in 2012. Since then, she has enjoyed immersing herself in the bluegrass world of jamming and festivals, and now plays mandolin in three bluegrass bands (Wayward Angels, River Mountain Riot and Blue Trio). Jody has had an eclectic musical background, playing piano and violin as a child and picking up brass instruments during high school. She has sung and toured with chamber choirs and holds a Bachelor of Music (Hons) from the University of Queensland.

Kay grew up in a family of 6, in a rural setting.  Earliest memories of her introduction to live music are of her father singing and playing banjolele.  She has dabbled a little over the years with ukulele, piano, piano accordion, guitar and double bass, however, it was watching a Glen Campbell show on television sometime in the ‘70s, Kay heard THE sound that she fell in love with.  A banjo.  Although attracted to its sound and appearance from an early age, it was decades later that she purchased one and began taking lessons.  As well as Wayward Angels, Kay also performs with Blue Harmony, and Blue Trio.