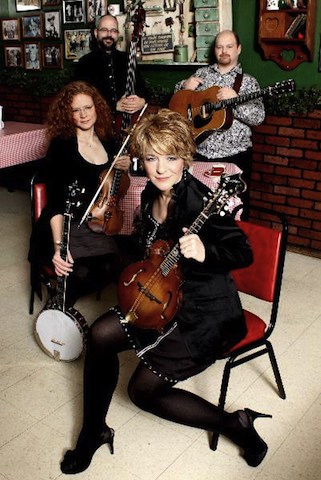 Bell Buckle Records has advised us that the award-winning Valerie Smith and  Liberty Pike are running up the national radio charts like wildfire.  The band just returned from a two month European tour, then headed straight to Canada for a performance at the TOMM Fest in Kingston, Ontario where they also hosted numerous Introduction To Bluegrass school programs throughout Kingston and the surrounding area.  After that, this high energy group returned to the U.S. for a rousing performance at the  popular ROMP Festival in Owensboro, Kentucky before returning home to Tenn. To find their new hit single, Blame It On The Bluegrass at #6 this month on the Bluegrass Unlimited Magazine’s Top 30 Songs and #8 on Bluegrass Music Profiles Magazine’s Top 30 Hot Singles chart.

The album, Blame It On The Bluegrass, is #8 on Powersource Magazine’s Top 35 Albums, climbs to #12 on the Bluegrass Unlimited Top 15 Albums, appears on the Root Music Report Top 50 Bluegrass Albums, and has been #5 for the last three months on the Cashbox Magazine’s Top 20 Bluegrass Albums chart.  This hot new album is a “six-pack project” and part of 12 songs recorded at the International Bluegrass Music Museum.  The second volume of six songs is scheduled for release early next year.

In other band news, Country Roads, the travel documentary by German filmmaker Christopher Mosselman which prominently features the talents of Valerie Smith & Liberty Pike, won the Viewer’s Choice Award at the prestigious Filmakademie Baden-Württemberg’s Twilights show.  In 2010 while still in production, the film picked up the school’s Caligari prize.  The film is in the final stages of editing.  For continued updates and to find out when the film will be available for viewing and purchase, please stay tuned to ValerieSmithOnline.com.  In the meantime, click here to view the Country Roads trailer.  Note that the bed music, Heaven Is Waiting, was written by Liberty Pike member, Becky Buller and performed by Valerie Smith & Liberty Pike on her album That’s What Love Can Do.

Valerie Smith and Becky Buller will also be part of the Bluegrass Bands Helping Hands, Volume III CD featuring original music and arrangements from other artists including: Mark (Brink) Brinkman, The Hillbenders, Special Consensus, Donna Ulisse and many  more.  Organizer, Paul Byrum announced the Kick-starter Campaign for the album that will assist over 1600 children with special needs in Dalton and Whitfield County Georgia.  A project has already begun to build a special surfaced and equipped recreation facility to host baseball and similar recreational events but a tremendous amount of funding is required to see the park to completion.  The park when completed would serve the residence of North Georgia and Chattanooga, Tennessee.  For more information, please visit www.bluegrassbandshelpinghands.com.

Becky Buller continues to receive incredible accolades for her songwriting and fiddling talents, so she was thrilled to learn she will also be included in a new Banjo Girl Calendar being released by bluegrass radio personality and festival MC, Darwin Davidson.  Stay tuned for more information.