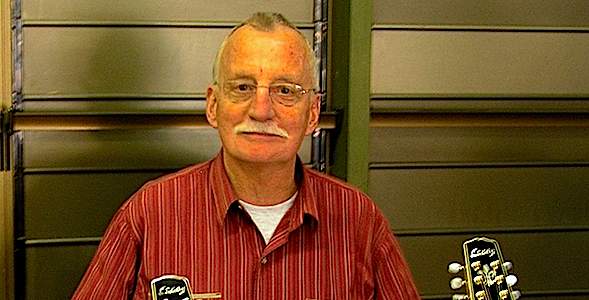 It is with deep regret that we learn of the recent passing of noted luthier and exceptional gentleman John Liddy.

The following article has been kindly submitted by John Bridgland*,  a proud Liddy mandolin owner from from Adelaide:

Adelaide mandolin luthier, John Liddy, who died on 4 September 2013 aged 69, has left a legacy of widely admired mandolins across the Australian bluegrass community.

John was South Australia’s finest (and sole) contemporary mandolin luthier over a 12-year period between the late 1990s and about 2009 that saw him before that period crafting arch-top jazz guitars. When he commenced his exploration into the mysteries of the mandolin, he created new opportunities for Australian bluegrass musicians, because good, mid-priced, professional quality mandolins were hard to find.

For most of his luthiery career John was based in the Adelaide Hills suburb of Mount Barker, but at his death he was living in the coastal town of Goolwa, near Port Elliot, a beach hamlet where he grew up. Goolwa is about 90 minutes’ drive from Adelaide.

In the early 2000s, Adelaide musician Paul Thompson interviewed John to create editorial content for John’s retail website. It was at a time when his luthiery career was at its peak, not only offering customer-specified arch-top guitars, but also flat-back mandolins in the American A and F styles.

John told him: “I made my first guitar in the early 1990s for my young son who had just started to play. It was a [Fender] Telecaster copy and little did I realise the implications this project would have. The first arch-top guitar soon followed. The wood tone blew me away. I came from a background of fine woodworking. Suddenly, I was making things that were alive, rather than furniture whose destiny was to sit in a corner looking nice, waiting to be dusted every now and then.”

John’s prominence at music festivals obscured the fact that he was not a practising stringed instrument musician. In his youth the piano had been a field of study. Yet when he adapted his woodworking skills to luthiery, capitalising on his fine attention to detail, he was able to craft admirable and beautifully finished instruments. Despite his relatively short luthiery career, he has left a small collection of fine arch top (jazz) guitars and A and F-model mandolins across southern and eastern Australia. A couple have been to the US, too – the home of the F-model mandolin made famous by the ‘father of bluegrass’, Bill Monroe.

The intriguing aspect about John’s work was that, in choosing to craft mandolins, and especially of the ‘F’ style, he was stepping into one of the most challenging luthiery fields – only ventured into by the brave and the exceptionally skilled. The F-model mandolin is extremely difficult to make well for a number of complex technical reasons. The instruments he was making in the mid-to late-2000s were very good and admired by serious bluegrass pickers. At an average price of about AU$3000 for “A” models and AU$6000 for F models, they were significantly cheaper than those made by Australia’s undisputed mandolin master, Victorian luthier Steve Gilchrist (average F-model retail AU$20,000–25,000).

At John’s mid-2000s production peak he would create batches of five or six at a time, perhaps twice yearly – that’s how long it took to complete each batch. He was fascinated by the tonal differences of woods, but confessed not to fully comprehend the sound differences between different spruces, bracing patterns or even string gauges. It all sounded sweet to him – and his admirers agreed. Musicians freely gave their opinions and advice, and John was always keen to listen. Having visited the US to scrutinise the bluegrass communities there, he paid close attention to how the Americans pursued their luthiery, and his F models, while not replicas, reflected many of the features of the early Gibson mandolins. There are probably fewer than 45 Liddy mandolins (A and F-models) in Australian circulation today, and probably fewer guitars. Now, this brand is destined to be rare. However, because of their excellent workmanship, generations to come will enjoy them.

* John Bridgland is an Adelaide mandolinist in the bluegrass band Bluegrass Junction, and is a proud owner of a Liddy F5 mandolin. During the 2000s he had the occasional pleasure of inspecting, and commenting on, new mandolins as John crafted them. John Bridgland is writing a small publication to honour John Liddy’s contribution to Australian bluegrass. If you want to contribute or seek more information, email John on jbeditor@senet.com.au.