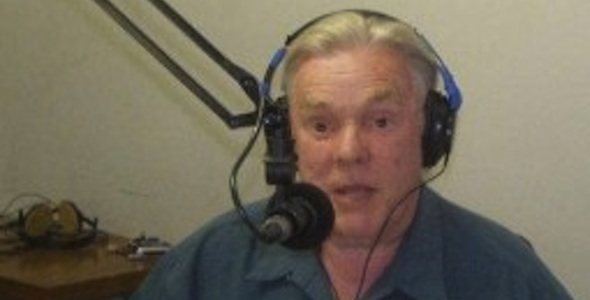 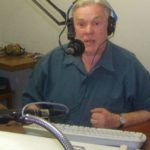 It is with great sadness that we let you know of the passing of Mr Geoff Morris.  Geoff passed away peacefully late on Tuesday  evening with his family and friends by his side at the Austin hospital in Melbourne.

Geoff will be remembered as the blind-guy with the dog by many festival goers. He always had so many words of encouragement for just about everyone he met.  He was a true gentleman who touched the lives of so many. He will be dearly missed.

Along with his regular broadcast for the Bendigo audiences, Geoff had an international reputation as a host presenter on three-hour bluegrass show for worldwidebluegrass.com with his program Wall to Wall Bluegrass.

Geoff Morris was a founding member of Phoenix FM and a tireless worker for the station’s cause.  He was the station’s first President and current President with only a short time out of that role since the station was commenced.  Staff and volunteers at the station say Geoff was an inspiration to so many.  He  was, along with many of us, looking forward to what would have been his 500th broadcast this Easter. Geoff recently underwent treatment for cancer at the start of this year.

Geoff Morris was born at around the same year as Bill Monroe released his song “Tennessee Blues”. Geoff was born blind and this became one of his prime motivators in life that let him tackle and overcome many obstacles.

Geoff originally trained as a classical pianist but he preferred to sing. He was introduced to bluegrass music in the late 60’s at Sydney folk festival which was was a defining moment for him. His first bluegrass record was by Charlie Monroe and from that moment on he was hooked. Geoff enjoyed singing in local bluegrass bands in Bendigo and for many years had presented the local community with his brand of bluegrass radio on a show called Wall-to-Wall Bluegrass which was also enjoyed internationally.

Geoff’s 2007 epic bluegrass adventure was a seven weeks pilgrimage to the heart of Bluegrass America, where, he declares unreservedly, he had one of the best times of his life. He enjoyed trips to the Jerusalem Ridge Festival and the Monroe home place, visiting Jimmy Martin’s grave and meeting Doc Watson. Geoff said he not only heard some superb bluegrass music but it was especially nice getting to know some wonderful people.

Geoff leave behind a wife and three daughters.