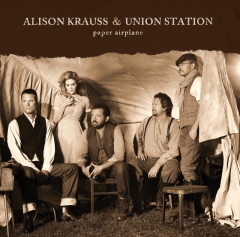 Released in April, Paper Airplane is Alison Krauss & Union Station’s fastest selling and highest charting release to date. The album – the band’s first in seven years – debuted on the Billboard Top 200 Album Chart at #3 and at #1 on the Country, Bluegrass and Folk Albums Charts, a career best for the band.