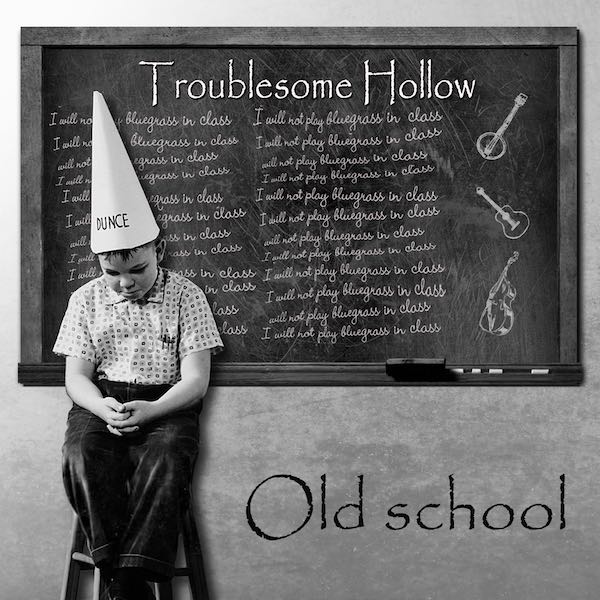 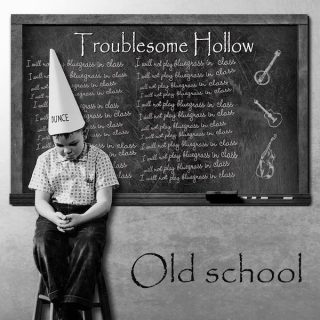 Troublesome Hollow Goes Back to ‘Old School’ with New Album

As a television host, radio DJ, business owner, and bluegrass musician, Tim White wears many hats. His most recent one is a dunce cap, as humorously depicted on the cover of the new album Old School (Fat Dog Records), which he recorded with his band, Troublesome Hollow.

The cover shows a boy looking forlorn, sitting on a stool next to a chalkboard, on which is written “I will not play bluegrass in class” over and over. It is the perfect representation of someone who has been obsessed with bluegrass music since childhood.

I grew up listening to bluegrass, and always loved it. I started learning how to play the banjo when I was a teenager, and never stopped – Tim White.

White is the host of the nationally syndicated public television concert series Song of the Mountains and radio show The Tim White Bluegrass Show.

The lessons paid off. White joined Troublesome Hollow in 1978, two years after the band was formed by guitarist Donnie Ollis and bass player Garry “Bear” Ollis. Through the years, they have performed mostly in East Tennessee, Southwestern Virginia and the surrounding region. Old School is Troublesome Hollow’s fifth album, but their first in 18 years, following a long hiatus due to a day job that caused Donnie to move away. The band reunited four years ago, and finally decided it was time to put out a new project.

Old School is composed of 17 tracks, some serious, others humorous, covering such topics as love, death, faith, money and homesickness. The first track, Forever More, is one of the band’s most popular tunes at shows. Written by Gary Ollis, it is a mid-tempo broken-love song, with Steve Thomas sitting in on fiddle and mandolin, as he does on several of the newer songs on the album.

Steve is a great musician who has worked with a lot of pickers over the years. He has played with the Osborne Brothers, Jim and Jesse McReynolds, Mel Tillis and a lot more. We’re real fortunate to him on the album – Tim White.

Even possums get a nod, with two recordings resurrected from Troublesome Hollow’s vault from the early 1990s – Five Pounds of Possum and Possum on the Run – featuring veteran fiddle and mandolin player Tim Laughlin and Dobro player Tim Harkleroad.

This album is a bit different. It’s bluegrass, but it also has highlights of different styles of music. A few of the songs have an Americana flav­­or. Worrisome, Worried Me has an old-time feel because I play claw hammer. It’s a humorous song about being broke –– Tim White.

Old School has a bit of something, for just about everyone including humor, sadness, faith, original tunes and old favorites. The only instrumental track, which happens to be at the end, is one that is most often sung at the beginning of ballgames and other events: Star Spangled Banner.

I thought it would be a neat twist to do it with just a banjo. We’re not trying to get political, but we’re all country boys and we swell with pride, when we hear that song – Tim White.

Unlike the boy on the cover, there is nothing dunce-like about this album. If Old School were a report card, it would consist of straight A’s.

Old School  by Troublesome Hollow is available on iTunes, Amazon, CDBaby and elsewhere. More information about the band is available at their website, on Facebook and on Twitter.