Trio of Gold From Rebel Records 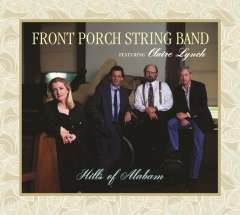 Rebel Records had announced the release of three new and important compilations drawn from its extensive catalog of Bluegrass masters: Hills Of Alabam, featuring Claire Lynch & the Front Porch String Band, along with two budget CDs that include classic instrumental performances by many of the greatest fiddlers and banjo pickers in the music.

Claire Lynch is celebrated today as one of the premier vocalists in Bluegrass—she has twice received the coveted IBMA award for Female Vocalist of the Year. Hills Of Alabam contains the very best of the two early Rebel albums that helped establish Claire and her group the Front Porch String Band as a mainstay of the Bluegrass scene in the 1980s.

The Front Porch String Band band was one of the first to present a sound that incorporated contemporary material and arrangements—like their classic take on the old standard Wabash Cannonball. Claire is also recognized as a top-notch songwriter, and this reissue includes five of her best-known pieces like Come Unto Me, I Found You, Some Morning Soon and the title track Hills of Alabam. It should also be noted that this collection features the original recordings of Wabash Cannonball, Kennesaw Line and Hills of Alabam. Another notable performance is Claire’s The Day That Lester Died, which first appeared on Mark Newton’s 1999 tribute to women in Bluegrass, Follow Me Back To The Fold.

With its True Bluegrass Banjo and True Bluegrass Fiddle anthologies, Rebel has again selected some of the best-known and best-loved instrumentals that will be prized by musicians and fans of these two key instruments (similar collections showcasing the guitar and mandolin are planned for the future). True Bluegrass Banjo includes tunes by Ralph Stanley, J.D. Crowe, Sonny Osborne, Don Reno Bill Emerson, Eddie Adcock, Jimmy Arnold and Sammy Shelor among others, performing their versions of classic tunes like Hard Times, Bear Tracks, Clinch Mountain Backstep and Home Sweet Home (the cuts by Reno, Adcock and Sonny Osborne have long been out of print).