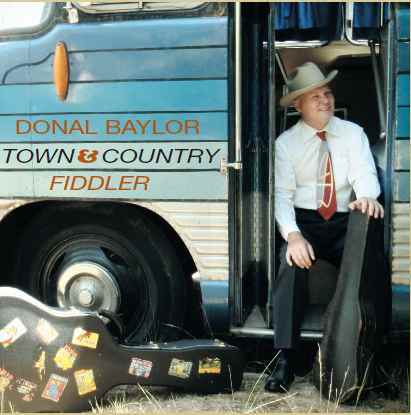 Town and Country Fiddler is about as good a name as one could come up with for this album as it not only describes the fiddle and guitar master responsible for it, but it conjures up great imagery of the music contained therein.

Donal Baylor is one of this country’s most respected fiddle players and one of life’s true gentlemen. Not to put too finer point on it but his guitar playing is far from ordinary also. Donal’s dexterity on both guitar and fiddle has won him honours at national picking championships and earned him great respect from his international peers. So much for the man, on to the CD.

On this album Donal plays guitar and fiddle on all but 2 of the very generous offering of 15 tracks on this album. He is also accompanied by some of this nation’s finest bluegrass musicians in Hamish Davidson on banjo, Lachlan Davidson on mandolin, Mick Harrison on banjo, Andy Baylor (Donal’s brother) on guitar, Steve Gilchrist on mandolin and Pete Fidler on Dobro. It’s an exciting collection pickers which bears out in the music.

The album opens with a 30 second teaser featuring Donal and the Davidson Brothers in a fast yet sweet rendition of the old Stanly Brother’s tune Daybreak in Dixie. It closes with a wonderful duet of When I Grow Too Old To Dream featuring Donal on fiddle and his brother Andy on guitar.

The album holds many surprises not the least of which is the title track, Howdy Forrester’s Town and Country Fiddler, which Donal does great credit to on both fiddle and guitar, as does Hamish Davidson on banjo and his brother Lachlan on mandolin.

Another gem is Marshall Wilborn’s composition Goodbye to the Blues. For this arrangement Donal has pulled in Chris Jacobs one of Australia’s most highly regarded bluegrass vocalists along with Steve Gilchrist on mandolin, Mick Harrison on banjo and Ruth Hazleton delivering some fine harmony vocals.

A track worth highlighting is Bill Monroe’s haunting Farewell to Long Hollow, again featuring Donal, Mick Harrison and Steve Gilchrist. These boys play it like it should be played – Monroe pleased would be well pleased.

There are a total of 15 tracks on the CD and all equally worth commenting on, but space prohibits. There is nothing left to say now but to urge you to go out and buy this CD. Help keep Australian bluegrass music alive. This is an album worth collecting.

For a full track listing and some sample tracks on our previous post announcing the CD’s launch. Or you could simply visit Donal’s website.