Too Blue – Trouble with the Grey 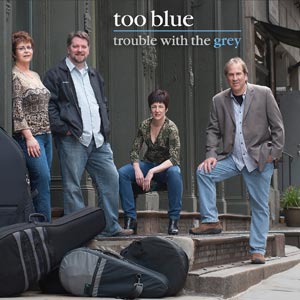 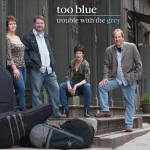 Too Blue is a quartet with members from the states of New York and Connecticut. They have plenty of focus in their personalized music inspired by bluegrass, swing, and country. By focus, I mean they have spirit, rhythm, technique, tone, taste, and discipline. They impart a lot of good balanced feeling by virtue of there being two gals and two guys in the band – Joan Harrison (banjo, vocals), Betsy Rome (guitar, vocals), Michael Sassano (mandolin, vocals), and Jamie Doris (bass). Joan and Betsy confidently handle lead vocals, and their relaxed vocalizing together is always smooth on songs like “Face the Music” as they’re “runnin’ away from the blues.” Half of the tracks also feature guest 5-string fiddler Rob Hecht. Their eclectic, well-arranged music is really anything but “too blue” because they convey many moods, and abundant amounts of soul and emotion. Too Blue succeeds by giving living, breathing character to their tunes. With nine originals and three covers (originally released by Karla Bonoff, Patsy Cline, and Joe Jackson), the band will gain even considerably more attention if they continue to play with their characteristic naturalness, depth and expression.

Self-penned instrumentals such as “Twister”, “Turnpike Reel”, and “Grace’s Fancy/Murphy’s Rag” show just how nimble-fingered and proficient these pickers are. The album’s Grismanesque closer, “Mice in the Camper” illustrates clearly how well they collaborate and blend. Usually playing a 1962 Martin D-18 guitar, Betsy Rome even switches to her Gitane DG-255 on that number to give it a distinctly gypsy jazz feeling.  The witty title cut, as well as a cover like “How Long Must I Wait For You?” also emphasize that the band is much more than a bluegrass group. Too Blue has been together for over a decade, and this is their second album. One could say that their honeymoon excursion is over, and I’d highly recommend you get on-board their train to check out their tasty swing-grass music. They now play at many festivals and events in the northeastern U.S., and I hope to see them touring further afield in the near future.

For further information on this group visit their website.