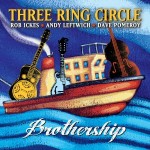 Who Are Three Ring Circle?

Acclaimed instrumentalists Rob Ickes, Andy Leftwich, and Dave Pomeroy joined together as Three Ring Circle to pursue a common goal – creating innovative and memorable music with the unique combination of dobro, mandolin, and electric upright bass. They are individually renowned as world class players known for expanding the vocabulary and boundaries of their chosen instruments, and the trio format allows them unprecedented creative freedom and stylistic versatility. Their debut album, a self-titled CD released by Earwave, included 7 originals written by all three members and creative reworkings of tunes by Stevie Wonder, Jeff Beck and Bireli Lagrene.

The TRC boys are back, doing what they do best: raising the bar to dizzying heights in their bluegrass-meets-rock-meets-jazz world. They do it with tone, taste, and absolutely unbelievable chops. Andy Leftwich’s mandolin playing is flawless, Dave Pomeroy’s bass is warm and round, and Rob Ickes is Rob Ickes-a first-ballot Dobro hall of famer. “Just a Rumor” is a highlight, with its spot-on rhythm and jaw-dropping solos. – Matt Blackett, Guitar Player Magazine

Grammy-winning vocalist Jon Randall Stewart is featured in this bittersweet interpretation of a classic song written by Tom Petty, with Rob on dobro, Andy on fiddle, and Dave on bass.