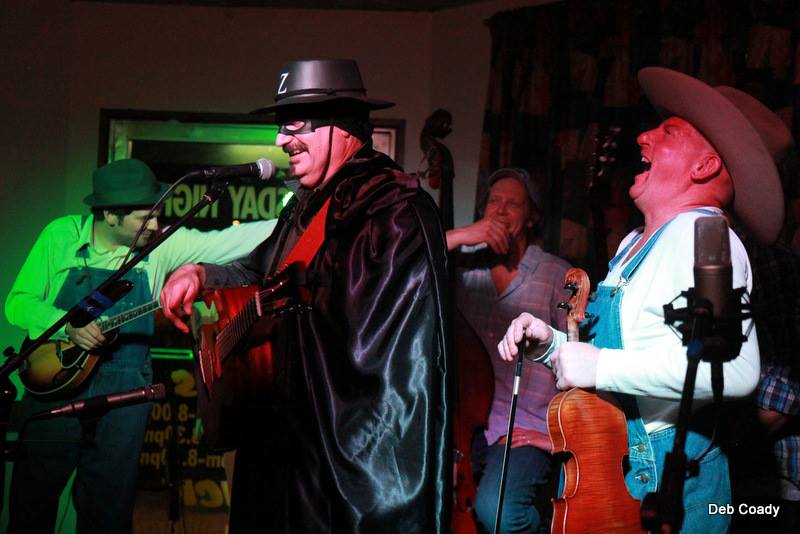 The roof on Yinnar’s old Community Hotel received a number of workouts this year, being raised to the point of collapse on several occasions during the Strzelecki Stringbusters’ monthly Bluegrass & Old Time shows.

With continued strong support from local, regional & interstate punters, this year saw several milestones achieved including the 50th pub show, the introduction of a ‘song raffle’ night (where the audience chooses the tunes) and the 1st evening featuring two special guest acts. All shows were sold out and included a warm-up set from the Stringbusters, followed by the guest act and concluding with an all-in final set symbolising unity through music.

February: Bill Jackson and Pete Fidler returned for their 3rd visit, showcasing Bill’s panoramic bag of tunes penned with his brother Rocky. The closing song ‘Big Rivers’ brought the house down. On that night, Pete become the equal ‘guest champion’ by racking up his 4th overall visit, having been a part of the Big Bug Trio’s 2012 show. He now sits along-side the Whitetop Mountaineers, who will put their noses in front again after their forthcoming Jan 2014 show. Come on Pete.

March: With our old mate Mike Compton lined up for his 3rd stay at Ray’s place, the March show was already set to be a big night. Then the long-chased Donal Baylor called to say the brothers were heading through town on the same night. The answer was obvious: a double-header; and what a stella evening it turned out to be, with Mike performing a relaxed and funny solo show, before The Baylor Brothers knocked the crowd out with their smooth presentation of Western Swing classics, lonesome lovesick cowboy tunes and foot-stomping hillbilly hits. A massive night of high-end musicianship, where the traditional all-in-jam at the evening’s close required a traffic cop to direct various soloists to centre microphone.

April: The Stringbusters celebrated their 50th pub show in unique style in early April without a guest act. The night’s song choices were handed over to the audience who, with complete Stringbuster song-lists in hand, called the tunes as raffle tickets were drawn from the hat. Nothing like being kept on your toes, that’s for sure. Tunes not played live for years formed the bulk of the evening, which turned out to be a hoot.

Later in the month, The Stillsons made their debut at the Pub, on the back of a performance at Yinnar’s Fiddlehead Festival in February. Cat and the boys performed a laid-back show where their silky harmonies and detailed song arrangements went down well, with the crowd treated some great original tunes. Not since Andy Baylor’s Cajun Combo appeared back in 2011 had the pub seen a drum kit in the guest bands’ lineup which, combined with a pedal steel, provided a new experience for the audience.

May: The 1st international guests for the year arrived early in the month in the form of NZ’s Pipi Pickers, who rolled into town looking out for the fabled Pub, and anticipating something bigger drove right past it. Jenine and the boys ripped it up for the assembled throng, handled the obligatory sheep jokes with grace, and had a ball in the final all-in set. It was noted that Jenine’s loan bass (courtesy of Dougie Bull), had returned to Yinnar again, and appears to be the bass of choice for nearly all touring international bands. That’ll be an interesting conversation starter when we finally meet Dougie one day.

Three weeks later, Oh Pep! hit the stage with their full line-up. As anyone who’s seen Liv and Pep perform will attest, these gals are spellbinding, and they became instant darlings of the Yinnar crowd from their first song. As with many acts, the band brought along their merchandise for consumption by the appreciative audience, and along with their CD’s, sold much of their unique range of crockery after the show. Without doubt, the best (and only) ceramic products that any band has transported to Yinnar.

June: Mustered Courage kicked Yinnar’s collective arses during a show that put several punters in hospital with strained ‘hollering’ throats. Paddy showed the boys where to find the pub, having been in Oh Pep’s line-up the previous month, and the band provided all those present with a memorable evening of high energy original and traditional bluegrass tunes. They were clocked by the Bluegrass Police for exceeding the speed limit several times, but could not be apprehended as they provided another highlight for the punters.

July: With Ray Negro heading overseas and set to miss the August show, the Stringbusters made him work extra hard by running the second ‘guestless’ show for the year. The song raffle once again proved to be great fun, and a surprise 3-song set featuring the powerful vocals of Lyn Boothman and her Stringbuster dad Danny brought thunderous applause from the full house.

August: We were honoured to host Australian legends Ian Alexander & John Boothroyd when Appalachian Heaven finally made it to Yinnar. With Pepita (Oh Pep) and Kat (Big Bug Trio) filling in for the evening on twin fiddles, the band led the crowd through a smorgasbord of traditional old time tunes. Melbourne artist Jenny Biddle featured earlier in the evening, winning the audience over with her soul-tinged tunes and warm stage presence.

September: Following on from his Fiddlehead Festival appearance in February, Nigel Wearne returned to Yinnar to treat the pub’s patrons to his bag of tasty original tunes. His ability to write new songs that have an old feeling went down well, while later the merchandise table on the back room was put to the test.

October: To add extra local flare, Jodie and Ricky from Coalville road kicked the night off featuring their dulcimer and banjo tunes before Australia’s kings of bluegrass punch, Hardrive Bluegrass Band, made their Yinnar debut to a packed house. There was plenty of appreciation for their traditional presentation of classic bluegrass tunes as Nick led the band through a hot set which included plenty of Jimmy Martin and Bill Monroe songs, featuring Dave Hellins’ stunning banjo skills.

November: The evening commenced with the Stringbusters jam group ‘The Jambusters’ packing the stage for their last get-together for the year. Luckily ‘only’ around 35 of the 100 folks who been through this year turned up to play, otherwise a wall would’ve needed removing. The Foghorn Stringband then charmed Yinnar as Sammy and Nadine returned, this time with Caleb and Reeb in tow, to again wow the Yinnar faithful and provide one of the highlights of the year.

After a fabulous weekend at the inaugural MountainGrass festival in Harrietville, Brisbane band The Company travelled further south and provided a huge end to the 2013 season of Stringbuster pub shows in late November. Led by George (returning for his 2nd visit), The Company blew the windows out with a rousing set featuring their high-end instrumental skills. The final all-in set saw a conga line snaking its way through the lounge, providing another first for the Yinnar pub.

The warm welcome and hospitality afforded to all acts again this year continues the Stringbusters’ pub-show motto: “Arrive as a guest, leave as a friend”. Although next year will see a change in the monthly show formats, we look forward to furthering our association with more guests, and increasing our long list of friends who provide the Yinnar faithful with good honest entertainment by gracing the hallowed Yinnar Pub stage.

Well, it’s not really a stage, just one end of the lounge, and folks, the carpet is looking a little worse for wear after 60 shows.