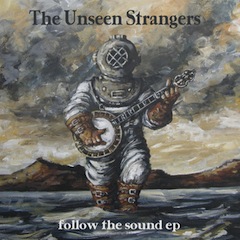 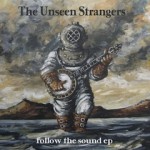 From their website we learn that The Unseen Strangers have ambitiously cultivated a musical identity shaped by good old-fashioned bluegrass, the limitless barrage of contemporary musical influences, and a relentlessly curious sense of humour. The Strangers draw from the beeps and buzzes of the modern world to create an imaginative, energetic brand of acoustic music that is unmistakably their own.The band has toured Canada three times, playing showcases at NXNE and OCFF to name a few, and is a favorite at festivals featuring genres spanning Folk, Country, Bluegrass, Rock and Electronic.

The Unseen Strangers are Adam Shier on guitar and vocals; Dan Latner on fiddle and vocals; Neil Wiancko on banjo and vocals; James McEleney on bass and vocals and Jeff Rothwell on mandolin and vocals.

The Unseen Strangers aren’t pretending to be cowboys. They’ll interrupt themselves for an instrumental breakdown of ‘I Like To Move It’ – The Globe and Mail.

Their new album Follow the Sound, is to be found here.