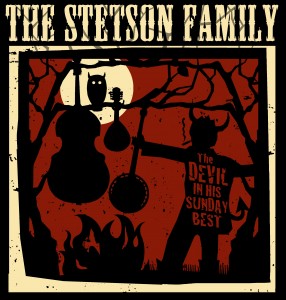 The Stetson Family have announced the release their new album, The Devil In His Sunday Best.

The album was launched at The Penny Black in Brunswick Victoria, on Sunday 23rd October after the band returned from touring and applied the finishing touches to the new release. The new album will be released nationally through Vitamin Records on 7th November. This album is the follow-up to their 2009  release, Hey Sister Mary, Where’d You Get That Gun.

The band writes that this new album brings a rootsy and original edge to the familiar and timeless sounds of bluegrass and alt.country with songs that are at times dark and dusty, lovelorn and heartbreaking, or just downright tongue in cheek.

The Stetson Family is the only band I can listen to without getting upset – Jean Macumber, 88 years old, Viewbank.

Guests on the album include some of Melbourne’s finest singer / songwriters, Tracy McNeil, Liz Stringer and Marni Sheehan. The Stetsons love doing what they do and audiences are eagerly encouraged to get on board and come along for the ride.