The Roys at CMA 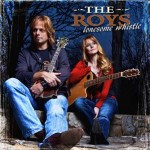 Rural Rhythm recording artist, The Roys, celebrated their hit album, Lonesome Whistle with 12 performances during last week’s CMA Music Festival.  Excited fans were treated to performances at the WSM/Durango Boots Acoustic Corner Stage; Cadillac Ranch (for Operation Troop Aid); The Power Source Showcase at B.B. King’s; The Gibson Acoustic Stage at the Hard Rock; the Bud Light Stage in the Sports Zone and other stages where they featured songs from their new album.

The Roys didn’t disappoint, piercing through the heat with their crisp traditional sound and elegant harmonies. ~ Mark Shimabukuro, The Tennessean.

Since its April debut at #7 on Billboard’s Top 10 Bluegrass Album Chart, Lonesome Whistle has also proved to be a radio hit as well. The album made its debut this month on the Bluegrass Unlimited Magazine Top Album chart along with the single, Coal Minin’ Man climbing 10 spots to reach #16 this month on the publication’s Top 30 Song chart. The single also appears at #4 on Bluegrass Music Profiles Magazine’s Top 30 Hot Singles and #4 on Power Source Magazine’s Top 10 Bluegrass chart this month as well.

Fans might also want to check out the recent Q&A with Lee and Elaine at Music News Nashville and at Examiner.com

The Roys are currently on tour with upcoming performances at: The Turkey Track Bluegrass Festival in Waldron, AR; Eastern Music Festival in Greensboro, NC; Pigeon Forge Patriots Festival in Pigeon Forge, TN; plus many more. Please visit www.theroysonline.com, via Twitter and on Facebook. Fans can receive the latest updates on The Roys and all their favorite Bluegrass artists now on their mobile devices simply by texting “bluegrass” to 90210.