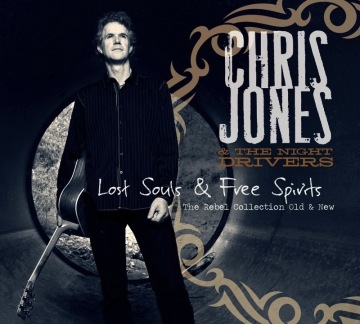 Lost Souls & Free Spirits: The Rebel Collection Old & New will be available from 28th February. The first single Final Farewell will be available for digital purchase from 31st January and the album will world premiere on Sirius XM’s Track by Track 25th January.

Rebel Records has announced the release of a new collection from Chris Jones & the Night Drivers, Lost Souls & Free Spirits: The Rebel Collection Old & New, on 28th February 2012. This album features 14 songs hand-picked by Chris himself, which are mostly drawn from three albums Chris recorded for Rebel between 1997 and 2000—No One But You (1997), Follow Your Heart (1998) and Just a Drifter (2000). The project also includes three cuts from his 2009 self-released album, Cloud of Dust, along with three brand new recordings that, like Cloud of Dust, feature his current line-up of the Night Drivers: Ned Luberecki on banjo, Mark Stoffel on mandolin and Jon Weisberger on bass.

One of the new cuts, Final Farewell, was released as an advanced single to bluegrass radio and is currently enjoying an enthusiastic response among DJs. The song hit #1 on BluegrassToday.com’s weekly airplay chart in December and debuted at #13 on its monthly chart for January. The song will be made available for digital purchase as a special pre-album promotion next Tuesday, January 31st via iTunes, Amazon.com, and other digital outlets.

Lost Souls & Free Spirits offers solid evidence that Chris Jones & The Night Drivers have a refined approach to bluegrass that, no matter the musicians, infuses a solid grasp of the tradition with heartfelt emotion and an unusual degree of thoughtfulness, wit and subtlety. Several aspects of the collection deserve special attention, starting with its nifty mixture of Jones originals and songs written by others. The former range from the oft-covered Uphill Climb and the crowd-pleasing Bridge To Portsmouth  to Final Farewell, co-written with Night Drivers bass player Jon Weisberger; the latter include nods to classic country (the Delmore Brothers’ Nashville Blues, Johnny Horton’s I’m Ready If You’re Willin’ and a Charley Pride hit, I’d Rather Love You) and contributions from long-time Jones friends like the late Harley Allen (Train That Never Slows Down) and, especially, Tom T. and Dixie Hall, represented by two modern classics, The Man On The Side Of The Road and the gripping Hero In Harlan.  The net result is a set that confirms Jones’ reputation as both an unsurpassed song finder and as one of the finest song crafters of contemporary bluegrass.

Chris Jones has been a prominent figure in bluegrass music for nearly 30 years, initially breaking through with groups like Weary Hearts, Special Consensus, and Dave Evans & River Bend. In addition to being a band leader and gifted songwriter, Chris is also known as a popular host on Sirius XM’s Bluegrass Junction channel. In 2007 he was awarded “Broadcaster of the Year” by members of the IBMA. This Wednesday Chris will be on the other side of the microphone as Bluegrass Junction presents a special WORLD PREMIERE of the album in its entirety on Track by Track, hosted by Kyle Cantrell.  The show debuts this Wednesday, January 25th at 11:00 am EST on channel 61 and rebroadcasts Thursday, January 26th at 9:00 pm EST and Sunday January 29th at 11:00 am EST.

Lost Souls & Free Spirits (Rebel 7518) will be distributed by Entertainment One (eOne) Distribution.