The Links – In God We Trust 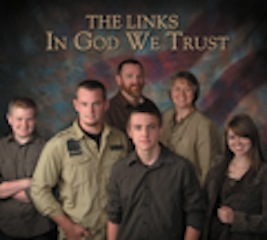 From Missouri, the Links eleventh album is a lovely project full of songs with patriotic and Gospel themes ranging from “The Star Spangled Banner” and “Veteran’s Tribute” to The Easter Brothers’ “In Perilous Times Like These.” Performing since 2001, the entertaining family band’s live show includes as many as nine talented family members Dad (Lance), Mom (Becky), five children, and two in-laws.

This album’s spotlight is on five Links. Lance narrates his own self-penned Wake Up America that is a call to take responsibility and return to God and the founding principles of our nation.  Becky Link, Kyle Link, and Rachel Link Keeler each provide lead and harmony vocals, including a couple of Becky’s originals (Strong Family Ties, Life’s Road Together). In both 2008 and 2009, Becky was recognized as the Midwest SPBGMA Contemporary Female Vocalist of the Year. We also hear Kyle’s fiddling on six tracks, and Ben Link’s banjo playing is included on five tracks. Ben composed the high-stepping instrumental closer, Powdered Wig. The family is clearly a very cohesive and collaborative one that knows how to work well together. That fact was reinforced when The Links won the 2011 National Single Mic Championship at Silver Dollar City, Branson, Mo. Video of their winning performances on You Tube will give you an indication of their well-rehearsed timing, coordination, and choreography.  Besides their musicianship and strong bond, the family is also known for its work ethic, discipline, humor and heart.

In God We Trust also includes eleven additional musicians, most notably Andy Leftwich, Jared Easter, Ron Block and Scott Vestal.  This was a wise move that brings considerable instrumental excitement and variety to the overall project released on Russell Easter Jr.’s Life Line Records label. Jonathan Yudkin’s synthesized orchestration is heard on the title cut written by Scott Spurgeon, and a high quality video of In God We Trust can be found on the Internet to further convey that message.  The album was produced by Jared Easter, who also played guitar and mandolin on the album.

The Link Family’s charisma and wholesome approach to entertainment provide an impressive musical show. Their inspirational presentation on “In God We Trust” clearly shows that they have a great deal of patriotism and much concern for the future of our country. It’s a powerful message, especially in these trying times, which would be well received in communities throughout the United States. There’s also a spiritual lesson and legacy to be learned from the music of The Links. It’s probably best summed up in Scott Spurgeon’s lyrics and message of the title cut. God has blessed and brought liberty to us. Don’t be ashamed to bow a knee and call on God to meet our needs.