The Kajabbi Yabbie Races by The Pluckers

In April this year The Pluckers, a band from the Isa Folk Club, descended on the small town of Kajabbi for their annual fundraising event The Kajabbi Yabbie Races.

What’s a yabbie? Yabbies are the Australian equivalent of the American crawdads, fresh water crayfish. Racing crayfish? Indeed, Australians are also known to bet on two flies crawling up a wall. Racing yabbies comes into that gambling category.

The Isa Folk Club is based in Mount Isa, Queensland, Australia. Mount Isa is a major world class mining operation in Far North West Queensland 1000 kms inland from Townsville and halfway along the 3400kms separating the cities of Brisbane in Queensland and Darwin in the Northern Territory. Every year there is a weekend fund raising event in the township called Kajabbi and known as The Kajabbi Yabbie Races.

Kajabbi is a tiny, remote town of about a dozen buildings, located 80 kms north west of the town of Cloncurry and about 130 kms north-east of Mount Isa by dirt road. During World War 1, it was a thriving centre for copper mining and cattle exportation via the local railway connection.

It is sited on the western edge of the tree lined Leichhardt River, a vast gravel bed in the dry season between April and September, and often a huge raging torrent during the tropical wet season from October to March. 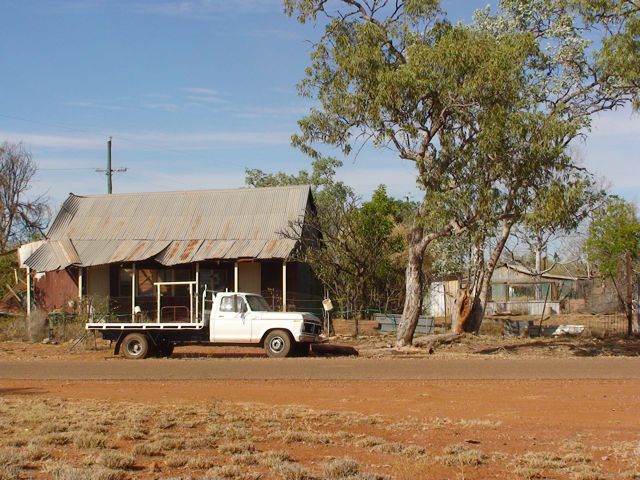 A Old Cottage in Kajabbi

Today the railway has gone and cattle leave the area on huge road trains. Mining is booming once again, but now, the mine’s workers fly in for work from other parts of the country, work in on-site accommodation, then fly home every few weeks.

The cattle properties in the region average around 1,200 square kms and neighbors are few and far between. Travelling the dirt road from Mount Isa to Kajabbi (130 kms long) we passed just two signs of civilization; one, a property, 40kms from Mt Isa, the other a turnoff to the Lake Julius recreation camp, 100kms further along the road. Lake Julius is the region’s major water supply. 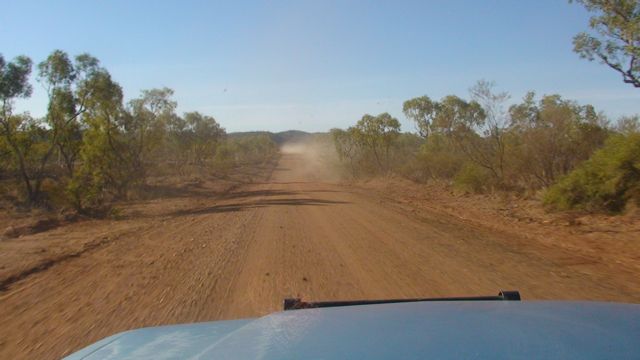 On the Lake Julius road

The local dirt roads are maintained on an annual basis, generally being put back in order in March after the wet season’s damage has finished. Fortunately for our travels from Mount Isa, the 110kms of dirt road had been recently graded. The relatively smooth trip was fine for my old Toyota 4 wheel drive, but wasn’t so kind to vehicles with conventional tyres. On our departure from Kajabbi on Sunday, many visitors were forced to travel in convoy to share resources such as tyres. Indeed, tyres without punctures were at a premium. 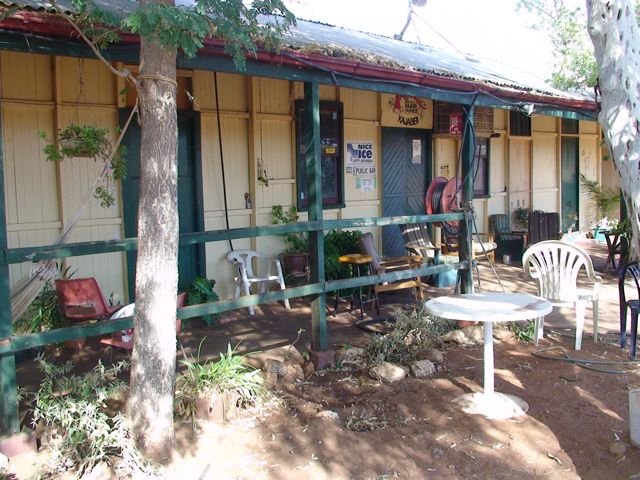 The road to Kajabbi from the south-west requires crossing the Leichhardt River bed, named after the local and historical tribesmen. The small but rustic Kalkadoon Hotel – also named after a north-west aboriginal tribe – is an old wooden building, moved on to the site during Word War 1.

The hotel’s single timber paneled walls feature exposed beams. Outside, shade is provided by the protruding verandah and some large, introduced pepper trees which stand out in their bright green, against a landscape of buff, brown and rust red. The nearby dry river bed is lined by large, shady eucalyptus trees which give a welcome break from a constant and harsh sun. Patches of green grass are a rare sight in the tiny outback settlement. 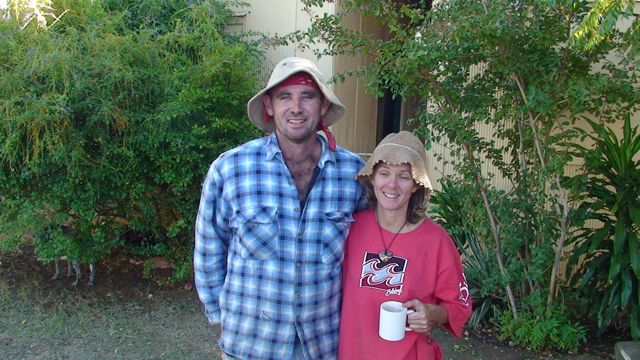 Jo and Wendy our Hosts

Our organizers, Jo and Wendy from Mount Isa, supplied a flat top truck for our stage and a generous sound system which included all the accessories. Jo’s rock band called Mixed Grill was the main act for the Saturday afternoon and evening with support from The Pluckers and a range of individual singers/performers including Shelly Morris. 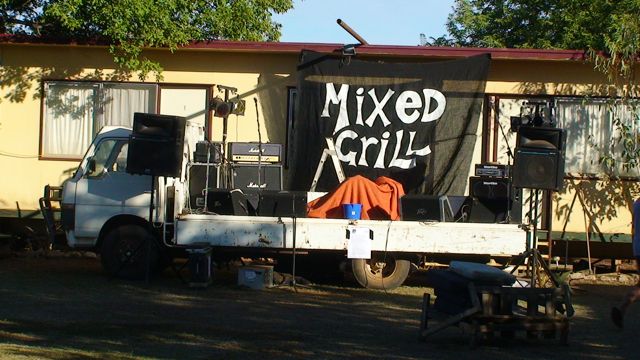 Accommodation for the weekend was a camp site behind the pub where an outside bar and kitchen kept everyone fed and watered. For the race, numbered yabbies were stabled in buckets and raced on a large plastic sheet in the centre of the grounds. The thoroughbreds were auctioned off to the willing crowd with some individual purchases running at well over $100 each. Syndicates were the order of the evening. Races took place by tipping the yabbies in the centre of the racing sheet and encouraging them to head to the edge. Winner take all. The yabbie owners were supplied with water pistols to help guide their charges to the finish line.

The night progressed to Sunday morning and by 4:00am some still had not finished their celebrations. After breakfast, The Pluckers enjoyed an open circle jam in the yard. 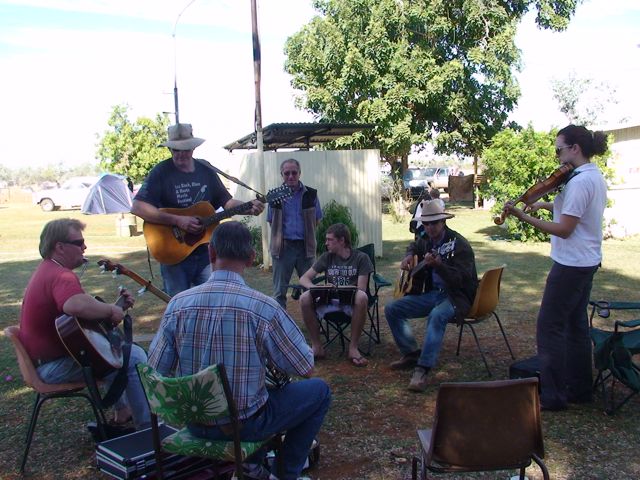 It was then off to pack up the camp and load the vehicles for the trip home. Because of the tyre problems Stretch and Greg decided to take their vehicles on to Cloncurry to stay on sealed roads for most of the trip. Bazza and I returned via the much shorter Lake Julius dirt road, which was accomplished without incident. We arrived back into Mount Isa at midday.

The Pluckers is composed of Bazza on guitar, mandolin and harmonica; Stretch on guitar, bass and Dobro; Sarah on fiddle and calls dances; Greg on spoons and learning guitar and bass; Allen on 5 string banjo. The group has a variety of musical backgrounds and preferences which impact on their repertoire. This includes folk, traditional, Australian country, bluegrass, rock and pop and Barrelhouse blues. Bazza and Stretch also write lyrics and music for the band.