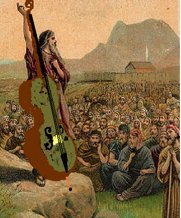 I attended the second Wednesday jam at the Yinnar Pub held under the banner of the Strzelecki Stringbusters, but in reality the pet project of John Werner. As I observed approximately 40 players being organized, encouraged, cajoled and nurtured by John, it put me in mind of what Moses leading the children of Israel might have looked like, tall, upright, animated and extremely passionate about the music and the act of participation, a born leader. Using a Double Bass instead of a staff.

John’s enthusiasm for music generally also reminds me of a song by Steve Young, ‘Jig’. One of my favorite tunes, a great piece of poetry and it seems to sum up what’s going on in my head, and I suspect, John’s head and everyone else who attended.

You can learn all about Steve at his website. Steve is probably best described as an “alt country” singer song writer. He has 14 albums to his credit and his best known composition is probably “Seven Bridges Road”. “Jig” comes from his 2000 album ‘Primal Young’, a very good CD. You can also hear examples of his work on his website.

Anyway back to JW. Thanks for a big effort and many great evenings of community music, all power to you.
Rainbow.