The Grascals – Dance Til Your Stockings are Hot and Ravelin’ 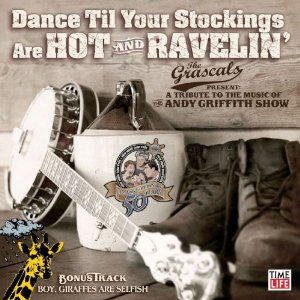 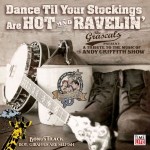 The award-winning Grascals’ Tribute to the Music of the Andy Griffith Show is a fitting way to celebrate the 50th anniversary of the television show which ran from 1960-68. In the show, The Dillards (Rodney Dillard, Doug Dillard, Mitch Jayne, Dean Webb) played The Darlings, a backwoods clan of musicians in the mountains near Mayberry, N.C. At the time, old-time and bluegrass music was often associated with hillbillies, and the music occasionally made its way into situational comedy. Despite the stereotypical connection, a show like Andy Griffith’s could be viewed as quite influential in introducing many throughout the nation to bluegrass music as Sheriff Andy Taylor and Deputy Barney Fife dealt with moonshiners, rock-throwing neighbors, and criminals from out-of-town. The Dillards were certainly on top of their game when performing on the show, even though they only appeared in six episodes (between 1963-66) and played a total of 14 songs during the show’s 9-year run. The music always generated large amounts of fan mail.

Fifty years later, The Grascals are now in their prime as they regularly release top-selling albums with their signature commercial sound.  The well-rounded unit is discriminating and resourceful, but this EP could be viewed as a little rawboned and lean. Nonetheless, the band’s six members serve up a high degree of showmanship and entertainment.  One is left wondering, however, why they picked the songs they did for this short, extended play (EP) project that The Grascals were asked (by Andy Griffith) to produce after he heard and liked what they’d done with the Mayberry’s Finest (food company) jingle.”

There are classics from the show (Dooley, Boil Them Cabbage Down, Stay All Night (Stay a Little Longer), Ol’ Joe Clark, Leaning on the Everlasting Arms). At Griffith’s request, The Grascals also wrote and recorded a short one-minute original song entitled “Boy, Giraffes are Selfish” that was inspired by a famous Barney Fife quote after a bunch of dogs were released in a thunderstorm.  Barney Fife said, “A dog can’t get struck by lightning. You know why?  ‘Cause he’s too close to the ground. See, lightning strikes tall things. Now if they were giraffes out there in the field, now then we’d have trouble.”  Barney’s point was that giraffes are selfish because they walk around with their heads in the clouds and don’t take care of each other. The Grascals are familiar with many quotes from the television show, and they are known to resurrect a few now and then during their travels and shows. And who says a song can’t be written about nearly anything?

The EP is a good conceptual idea, but it left me wanting more. I wonder if they were on a tight production deadline, and they only got enough material recorded for a 15-minute release. The Grascals do a good job with the old bluegrass standards, but they could’ve really infused them with new fire and life. Further, with only a few more songs, the tribute project could’ve been full-length album. With only a little more time invested, some fantastic new originals could’ve been inspired by the antics, advice and wisdom of the original Mayberry bunch. Remember the episode where The Darlings are discussing the song they are going to play at Charlene’s wedding? Briscoe asks, “How ‘bout ‘Don’t Hit Your Grandma with a Great Big Stick’?” Charlene replies, “No, Paw, That one makes me cry!” Now, in my opinion, there’s a great idea for a song just itchin’ to be written for an album like this. Or how about when Barney was asked to sing “A cappella”? Snapping his fingers in rhythm and singing “A cappella, A cappella,” he quipped, “Well, I don’t remember all the words.” There’s no question that the show was and still is “awesome family entertainment,” as Grascals’ guitarist Terry Eldredge describes it. To satisfy my lingering appetite, however, I reckon I’ll have to break out some DVDs of the old shows.