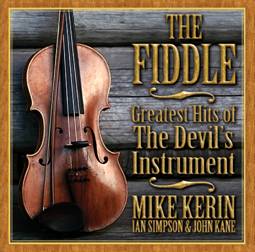 The Fiddle CD will be launched at “Notes Live” venue in Enmore, Sydney on Friday the 4th of November.  The night will feature Mike Kerin on fiddle, Ian Simpson on banjo, John Kane on guitar , and Michael Vidale on bass with special guests Genni Kane, Anne Kirkpatrick and more.
The Fiddle is the follow-up to last years very successful award-winning ABC album The Banjo from Ian Simpson and John Kane. This time they have shifted focus to the fiddle and brought renowned Australian fiddler Mike Kerin to centre stage. The album features the greatest hits of the Devil’s Instrument from the wild ride of Orange Blossom Special to well-known fiddle tunes like Arkansas Traveller to the gentle lament of Ashokan Farewell (as featured in Ken Burns Civil War series) and the country swing of Bob Wills.

Mike, Ian and John spent many years together as The Flying Emus and who better to invite along to help to celebrate the release of The Fiddle album than ex Flying Emu cohorts Michael Vidale and of course Genni Kane in a rare live performance. Also along for the ride will be long time friend and musical collaborator Anne Kirkpatrick. It will be a night of fiddle tunes interspersed with some classic bluegrass and Australian songs from some of the country’s finest players and singers.

Between them these artists represent a very large slice of Australian bluegrass, country and folk music history: