The Company to Play Melbourne 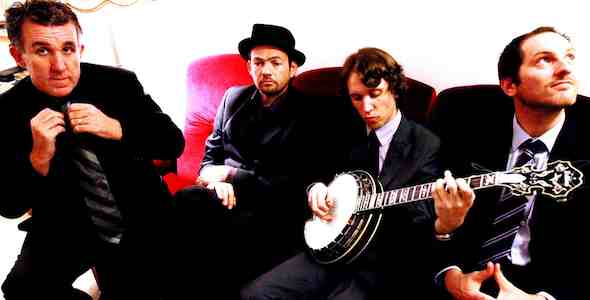 Innovative Brisbane bluegrass outfit The Company are set to play JamGrass Music Festival at the Thornbury Theatre, Saturday October 12th. Boasting two Australian Bluegrass champions on guitar, fiddle and banjo, The Company have a passion for high energy original acoustic music. From fast finger-picking to soulful songs with sweet harmonies – these band does it all.

Highly regarded for their fervour and originality, The Company has appeared at festivals all around Australia and the UK and they have been featured on local ABC radio in Brisbane with Richard Fidler, and National ABC radio with Lucky Oceans and the Daily Planet. Vocalist, fiddle, viola and mandolin player Michael Patrick says that the real musical magic comes from the interaction between the band members. “While there is a strong link to Celtic traditional music, bluegrass is also like jazz in that there is an expectation to improvise. Playing with these guys you feed off each other’s energy and creativity. You really have to be attuned to one another.” “Progressive purist”, George Jackson (fiddle, banjo, vocals) has recently returned from the United States bringing home with him the much-coveted first-prize in the Rockygrass Banjo contest to add to his growing collection of Australian awards and honours. He was also runner-up in the fiddle competition. George notes “I love The Company’s unique voice within the bluegrass genre. Each member spends a lot of time writing and arranging our own music for the band and it’s an exciting experience to be a part of. We all bring our different musical backgrounds to the process and what we’ve come up with is pure enjoyment onstage and off.” There is no doubting the virtuosity of these players.

Guitarist Jamie Clark has chops to burn, in a range of stylings, yet his playing is driven by the search for that musical holy grail– playing a part which best supports the song or tune. “Bluegrass and Old Time music are so immediate, there’s nothing between the listener and the instruments, singers and songs” Jamie says. “No electronic amplification or elaborate production. There’s a built-in understated elegance that is hard to find in other music that features improvisation and variations on themes and songs. The music is built on innovation and is a melting pot of styles, yet has strong ties to a deeper, older tradition that many people instinctively recognise. It has a deep spiritual basis, relating to gospel music of all hues, yet some of its major figures were legendary hell-raisers. There is something in it for everyone.”

Bass players in bluegrass bands have an unenviable role. Their work is characterised by the fact that no one seems to notice them … until they aren’t there! Markus Karlsen can hold it down simple for the other players to build on and but he also enriches the band’s work with fine melodic excursions up the finger board as the opportunity presents. He tells us “I try to complement what the fellas are doing, as this ‘band sound’ covers so much ground, I usually call on all my musical experience to find that certain something that complements/enhances the tunes, adds some unexpected colours to the texture and of course stay on the groove thing.” In late 2012 the band released their eponymously-titled CD, a collection of original tunes and songs.

The tone is set in the opening bars of the recording with the sound of Patrick’s old-timey fiddle on Come on Down. Red Eye penned by fiddle/banjo virtuoso Jackson features melodic cascading banjo lines. Patrick’s superb vocals are to the fore on High on the Hill. Ikea Breakdown works through some complex time changes but never to the detriment of the groove. Clark’s guitar break is lean and deft and every note rings clear. The Clark-penned Thief on the Vine features some delicious duo playing between himself and Jackson’s fiddle and while it’s driven by Patrick’s solid mandolin, it evokes Monk as much as it does Monroe, Lester Young as much as it does Lester Flatt. Easy Child features harmonised fiddles over Karlsen’s restrained supportive bass lines. Patrick’s consummate vocals slide into the upper registers without the forced affectation of some bluegrass singers. It’s high, even lonesome, but honey-smooth, rich and warm. On The Divide Jackson’s playing, as it typically does, forgoes flash and flurry for melodic inventiveness. The listener is better off for it. Patrick’s viola lends a Celtic gravitas to the lyrical Heavy Hours which is based on a Robert Burns poem.

The closer, The Lime Tree opens bright and breezy with some superb duo playing by Clark and Patrick before Jackson’s fiddle kicks in on the minor key bridge. While the music is richly informed by the bluegrass aesthetic, it never descends into pastiche. There are no cowboy hats or faux American accents here. The playing and singing are crisp, melodic and soulful and they swing like any good jazz band should.

In concert you witness this band’s virtuosity but also their wonderful engaging stage presence, spiced as it is by wry humour and camaraderie. This Company is certainly worth the investment of your time and your music-buying dollar.

Fantastic! … This band is raising the bar for acoustic musicians in Australia –  3-time Golden Guitar winner, Hamish Davidson of the Davidson Brothers.

They have the song writing chops to go with the flying fingers – Noel Mengel, Courier Mail.

A masterclass in bluegrass – Sean Sennett, The Australia.