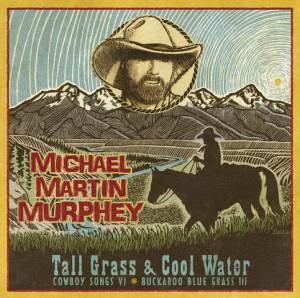 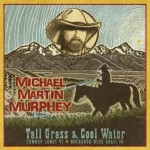 I first came across the Texas cowboy, Michael Martin Murphey as one of the many artists on the Circle Vol II album. I loved the sound of his voice and his song selection (Lost River) was perfect. That was back in 1989 and some 20 years later Murphy is now in his 60’s and he still sounds great.

This new album Tall Grass & Cool Water follows earlier releases under the Buckeroo Blue Grass 1 and 2 titles and is more country focused than bluegrass. Murphy, who also produced the album, has featured bluegrass instrumentation in the arrangements while the album celebrates and delivers all of the trappings of a great cowboy collection.

Murphey is a consummate storyteller and spins a great yarn with his music. He has created some romantic visions of famed outlaws Frank and Jesse James and Cole Younger in a trilogy titled The James Gang Trilogy. He also paints the most vivid picture in his The Santa Fe Trail which tells the story of a cowboys lust for life and love and the gal with a smile like an acre of sunflowers  whose eyes near set fire to the prairie.

No cowboy album could be complete without the yodel song and Murphy brings a Bob Nolan tune to the album called Way Out There.  Bob Nolan and the Sons of the Pioneers are one of the most influential western bands around. Carin Mari provides support to this track with beautiful harmony and the mandatory yodel. Carin also contributes to several other tracks on the album.
Murphey features two other Nolan songs on the album, Cool Water made famous by Marty Robbins, and Blue Prairie. The liner notes tells us that Murphey has intentionally placed his version of Blue Prairie after The James Gang Trilogy, reminding us that the time for reflection on past mistakes, regrets and poor judgements is often.

When you live the life of a cowboy, and the taste of love turns to lemons, you know you can always retreat to the land and find an understanding shoulder in the wind, rain, sun and sky. Murphey explores this notion in his beautiful, haunting ballad called Partner to The Wind. This is my pick on the album.

This CD has a power of musical talent amassed in Craig Nelson on bass, Sam Bush on mandolin and fiddle, Pat Flynn on guitar, Ryan Murphey on guitar, Andy Leftwich on fiddle and mandolin, Andy Hall on Dobro, Charlie Cushman on banjo, Mike Bubb on bass and Troy Engle fiddle and banjo.

Tall Grass & Cool Water is a great collection of cowboys music with a lonesome bluegrass flavour. Head on out to your favourite music store and grab a copy. You will not be disappointed.