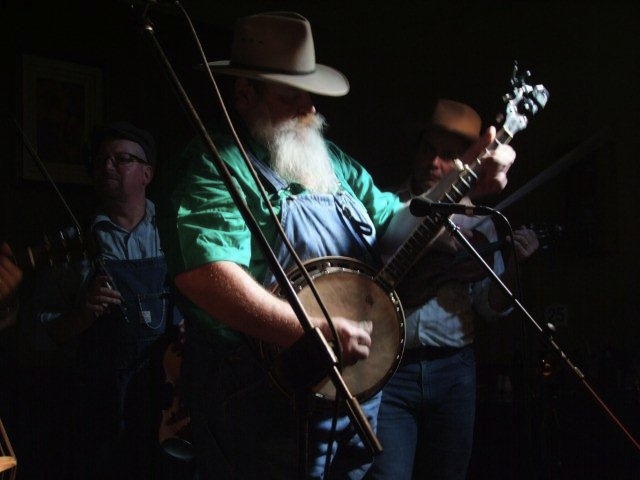 The Strzelecki Stringbusters held their last monthly Yinnar Pub show for the year recently, and what an evening it turned out to be.

With the dinner plates still clanking, and patrons jostling for drinks at the bar, the night kicked off with the 30-strong Stringbuster’s Bluegrass Beginner Band performing all songs learned during the year.

For the uninitiated, this large ensemble of mainly new musicians has sprung from the Stringbuster’s beginner sessions which commenced in March 2011. Over 9 months, with an average of 35 people attending each session, participants were introduced into the world of music-making in a relaxed and informal setting, with an emphasis on just having fun.

Next up were The Strzelecki Stringbusters who laid ‘em in the aisles with their unique mix of irreverent humour combined with truly terrible music (only jokin’ fellas).

Spokesman Gary White announced to the crowd that the previous month’s donation of $900 to help the family of local disabled girl Sarah in travelling to the National Disabled Sailing competition had produced dividends, with Sarah proudly presenting her 1st place certificate.

By 8:45pm the stage was set for the evening’s main act, Bluegrass comedian Pete Denahy, and what a show he delivered. Some acts seem to custom-made for specific venues, and having caught his show at Beechworth in August, it was immediately obvious that Pete & the Yinnar pub crowd would be a match made in heaven.

From the outset, Pete had the audience in stiches with an in-depth report on his failures at the Tamworth Golden Guitar awards over a 20 year period. Over the course of the next 75 minutes, both with and without instrumentation, he had the crowd in stitches as he lead them through his ‘silly’ songs, including Out the front of Target Blues, The Shopping Trolley Song and his big hit Sorta Dunno Nothin’.

These funny tunes were counterbalanced well with several ‘heritage’ style straight tunes that displayed his high-end song writing abilities, and great vocal delivery. Combined with his razor-sharp comedic timing, and several straight-up bluegrass tunes where he showcased his skill on the fiddle (with Tim O’Brien’s version of Workin’ On A Building a particular highlight), Pete’s performance left 250 people yelling for an encore, and ensured plenty of interest after the show.

He leaves the Yinnar pub as the only act to silence the entire pub during a performance, and will be welcomed back next year when his band Monroe’s Mill calls through Yinnar.

The evening concluded with the customary ‘all-in’ set, where the main act (and whoever else makes it through security) jumps up with The Stringbusters to wind the night up. Publican and master of the English language, Trevor Hornibrook, finalised proceedings by thanking the Stringbusters for their community contributions during the year, and stated that, although the band is much-loved by the Yinnar crowd, Pete Denahy had “Sh_t all over ‘yis tonight!”.