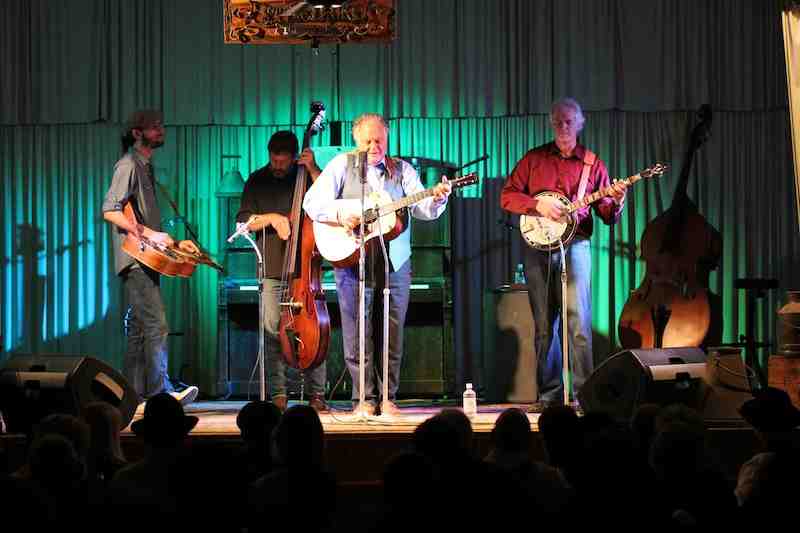 There’s been a fair bit goin’ on down Yinnar this year. The Strzelecki Stringbusters have been making sure of that with their continuing series of monthly shows featuring the very best in live acoustic roots, old-time & bluegrass music.

We have enjoyed playing host to international artists such as Mike Compton, David Long, The Whitetop Mountaineers & Hungry Hill. The Boys were stoked to present the great Peter Rowan at the Yinnar Town Hall in March this year.

Peter and his top-shelf band treated the full house to a wonderful show that covered new material as well as old favorites featuring world class pickin’ & harmonies and a lead vocal that just took you straight to bluegrass heaven. His voice started strong, and finishing even stronger after two full sets, with stories of Bill Monroe and his musical legacy captivating the audience between tunes.  We were reminded also of Peter’s instrumental skills, with a virtual how-to-demonstration of bluegrass rhythm guitar on his Martin D18 Golden Era. Seriously good live guitarist…

Peter invited The Stringbusters on stage at the end of the show, in particular “Brother Daryl”, who earlier, at Peter’s request, had taught him Waltzing Matilda. The crowd erupted in voice on the chorus, proudly treating their international guests to a taste of Australian song, and again on the final tune You are My Sunshine.  What a night.

In April this year, the boys were back at the pub, playing hosts to WA’s Bluegrass Parkway, on their 2nd visit to Yinnar. With the prodigious George Jackson standing in on fiddle, this fine band had the audience in the palm of their hand from the start. It’s fair to say there’s a growing mutual affection between BGP and the Yinnar punters that will hopefully continue for many years to come.

The following week, Australian finger-style guitarist Nick Charles performed a stellar solo show, and proved why he is regarded as one of the best acoustic performers in the country. The night also proved the live acoustic scene to be well supported, with the second full house in just eight days.

The great shows just keep on coming. This Wednesday, 30th May sees an all-local night of entertainment, featuring country stalwarts Neville & Aileen Boothman, with Bill Armstrong playing backup. The parents of Stringbuster Danny, they have been performing country music locally for over 40 years, and a big crowd is sure to turn out to help Aileen celebrate her 70th birthday on the night. Nev is sure to entertain with his bag of old jokes, and with members of the extended family likely to jump on stage if the mood strikes, it’ll be wall-to-wall Boothman’s on the night!

For the rest of the year, The Strzelecki Stringbuster’s Yinnar Hotel guest artists include: