Steve Martin To Perform at ACM 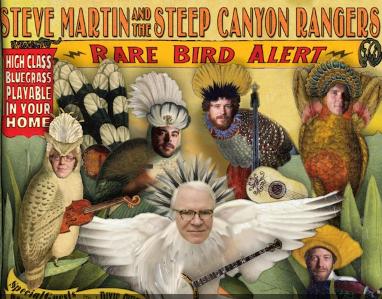 Grammy and Emmy winning actor/comedian/musician and bestselling author Steve Martin is set to perform at the 47th Annual Academy of Country Music Awards.

Steve Martin will showcase the banjo on a unique collaboration with ACM’s Vocal Group of the Year nominees Rascal Flatts during a performance of their new single Banjo. The Academy of Country Music Awards will air live from the MGM Grand Garden Arena in Las Vegas Sunday, 1st April 2012 at 8:00 PM live ET / delayed PT on the CBS Television Network.

Steve Martin and the Steep Canyon Rangers have also added extensive dates to their North American summer tour in support of their Grammy nominated album, Rare Bird Alert on Rounder Records.  Steve Martin and the Steep Canyon Rangers will perform at a range of venues this summer from intimate concert halls to major amphitheatres and music festivals.  They kick off their 35-city summer trek in Indio, CA at Stagecoach Festival on 28th April and make stops at some of the most prestigious venues across the country including Red Rocks Amphitheater with Emmylou Harris & Her Red Dirt Boys and Arlo Guthrie, the Ravinia Pavilion, The Bost

on Symphony Orchestra and the Ottawa Jazz Festival among others. The tour runs through 1st September, ending in Los Angeles at the Pantages Theatre.

Steve Martin and The Steep Canyon Rangers have embarked on four widely acclaimed tours and have delighted audiences at Bonnaroo, New Orleans’ Jazzfest and The Newport Folk Festival among others.

…what’s so heartening and wonderful to see is Steve Martin back on stage, doing both things he does best – playing banjo and being funny – The OC Register.

Martin was recently featured on NPR Morning Edition to discuss his best-selling book The Ten, Make That Nine, Habits of Very Organized People. Make That Ten.: The Tweets of Steve Martin and discuss the upcoming tour.  Listen to that interview here.

Rare Bird Alert features 13 Martin-penned tracks, including a live version of King Tut, and special guest vocals from Paul McCartney and the Dixie Chicks. Martin co-wrote two songs from the album with the Steep Canyon Rangers. Rare Bird Alert was produced by Tony Trischka and released on Rounder Records.