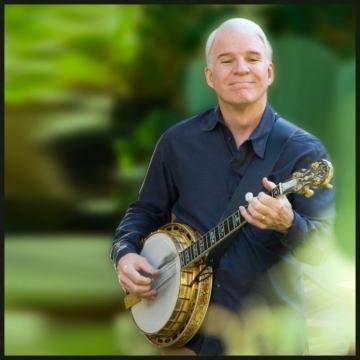 Steve Martin has a new writing partner, a guy even more famous than the comedian, actor, writer and banjo player. steve Martin has teamed up with William Shakespeare to add music to the playwright’s lyrics for a smattering of tunes at the Public Theater’s production this summer of “As You Like It” in New York City’s Central Park.

Shakespeare’s plays are filled with music — and As You Like It (a production which toured Australia with Australia’s Bell Shakespeare Company a few years ago) is one of the most musical — but few of the melodies have survived. The show’s director, Daniel Sullivan, decided to set the action in the rural American South around 1840, a perfect time for folk music.

That’s where Martin stepped in — composing five bluegrass songs to accompany the Bard’s lyrics, helping celebrate the 50th-anniversary season of free Shakespeare in the Park with style. Why Steve Martin? “It could have been that I’m the only bluegrass artist they know, frankly,” he says.  Martin, 66, won’t be performing the songs. Instead, he persuaded progressive bluegrass master Tony Trischka to lead a small band onstage that includes banjo, fiddle, bass guitar and a guitar.

The new album includes a live version of his old “Saturday Night Live” routine “King Tut” — “Buried with a donkey/He’s my favorite honkey” — and has special guest vocals by Paul McCartney and the Dixie Chicks.

He’s also got a new book out of his tweets — “The Ten, Make That Nine, Habits of Very Organized People. Make That Ten.” (Sample: “I have decided not to run for president. Have skeleton in closet, which is actual skeleton in actual closet.”)

Martin is the latest musician to tackle writing music for a play, joining Alicia Keys, who wrote music between the scenes of “Stick Fly”; Branford Marsalis, who added original tunes for “The Mountaintop”; and Terence Blanchard, who spiced up the current Broadway revival of “A Streetcar Named Desire.”  “It feels really good,” Martin says of being in such company.

Martin also is putting together an album with singer-songwriter Edie Brickell. He has written 13 banjo tunes, emailed them to her, and she has emailed him back with lyrics.  “She was on a creative roll, let me tell you,” he says.

So, it seems, is Martin. The Associated Press recently caught up with him to ask about writing music for Shakespeare, how tweeting is a new kind of comedy for him, and why he now regrets putting a version of the “King Tut” routine on his album.

AP: Was it daunting to write songs for a Shakespeare comedy?

Martin: I’ve been writing banjo songs my whole life. I wrote a bunch when I was in my 20s. Then I stopped. Then I started writing them again about 10 years ago. So I’m fairly comfortable with it.

AP: How did you know you could wed banjo to Elizabethan lyrics when you were asked to do this by the Public Theater’s Barry Edelstein?

Martin: Before I take on stuff like this — something new — I actually do it before I say yes. So I sat down with a couple of tunes and wrote them before I said yes. And I felt really good about them. And that’s how it came about. I called him the next day and I said, ‘Yeah, I’ll do it.’

AP: You added a live version of your old “King Tut” routine on your new CD. Why?

Martin: I just liked the idea of a bluegrass ‘King Tut.’ I thought it was kind of funny. We did it in our show for a while, and I put it on the record because I wanted people to know that the live show we did was kind of fun.

AP: But now you’ve dropped it from the live set. Why?

Martin: We have so many good songs now that we just don’t have time for it. And I don’t want to play on the past. I almost wish I hadn’t put it on the record now. We’ve got new songs coming in and we barely have time to play all the songs we want to play. And I don’t like to do more than a two-hour show. I think enough’s enough. They get the idea.

AP: Switching gears, what did you learn about tweeting after compiling your book?

Martin: When it was all finished, I thought it was a completely new form of comedy. It’s talking back and forth with people. If it was just me, it would be one-liners. But the fact that people are responding — and sometimes they’re hilarious — I felt I’d never seen that before.

Martin: Sometimes when I objectively look at my tweets, I go, ‘I couldn’t get away with that onstage.’ Or, ‘That’s just a kid’s joke.’ But somehow in the tweet form they take on a different form — they’re just silly. You have to remember that people are getting these over their phones at lunch. They didn’t pay $100 to come see you. They’re free. There’s a different standard.

AP: You’ve got CDs with the Steep Canyon Rangers and Edie Brickell and a book of tweets and now a Shakespeare soundtrack. Are these all things that you’ve been dying to do?

Martin: There is no master plan. It’s not what I always wanted to do. All this stuff just came up. It just came up. Don’t expect anything because I might run out of gas. But I’m having fun.

AP: Now that you’ve done “As You Like It,” what about a tragedy? How about music for “Hamlet”?

Martin: For banjo? I don’t know. I think a comedy is right. I don’t think you can keep doing bluegrass and Shakespeare. I think once is enough.