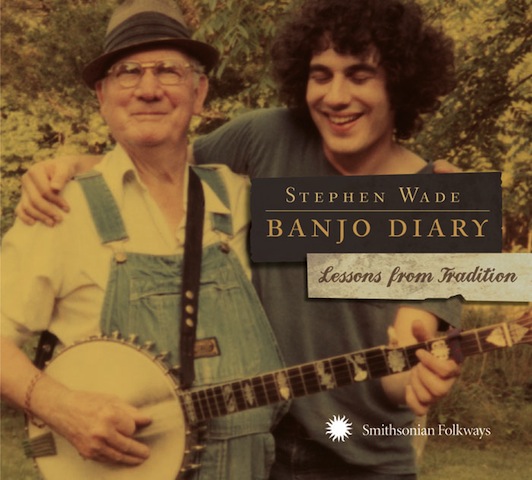 The Smithsonian Folkways Recordings have released Stephen Wade’s Banjo Diary: Lessons from Tradition. Its release coincides with the publication of his new book, The Beautiful Music All Around Us: Field Recordings and the American Experience (University of Illinois Press).

You can hear three of the tracks from the album Banjo Diary: Lessons from Tradition here.

The album emerges from decades of personal contact, of skills and repertories passed along by living example. For Stephen Wade, a musician who writes about music, Banjo Diary takes its inspiration from the earlier field recordings that form the core of The Beautiful Music All Around Us. “Find the people who know how to play this music,” his teacher instructed him years ago. Urged to explore this creativity in its home environments, Banjo Diary chronicles eighteen of those experiences in sound and accompanying notes and booklet photographs.

Called in 1979 “a wondrous artist” by Time magazine for his landmark stage show Banjo Dancing, Stephen Wade has continued on as a documentarian, recording artist, radio essayist, and scholar. Prospecting for American folklore wherever it thrives, his last project for Smithsonian Folkways involved one such find: multi-instrumentalist Hobart Smith. That work resulted in Wade’s critically acclaimed In Sacred Trust: The 1963 Fleming Brown Tapes (2005).  Now, Banjo Diary: Lessons from Tradition extends its underlying message, telling of “an education written indelibly in a musician’s heart.”

Wade is a wonderful emissary, of course, not only in his astounding skill and unflagging energy, but through his mesmerizing passion and devotion to the music and to its master musicians – Richard Harrington, Washington Post.

For information about The Beautiful Music All Around Us: Field Recordings and the American Experience (book), including an extensive events schedule starting in August, please visit: http://www.press.uillinois.edu/wordpress/?p=9518. The album contains 18 tracks, 58 minutes, 44-page booklet with extensive notes and photos.