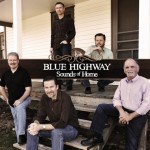 Blue Highway’s new album, Sounds of Home, has four songs in the top 10 of the Bluegrass Today Weekly Airplay Chart – I Ain’t Gonna Lay My Hammer Down at #1, Drinking From a Deeper Well at #4, If You’ve Got Something to Say at #5, and Bluebird Days at #8.

Released on 23rd August, Sounds of Home is Blue Highway’s first collection of original material in over a decade.  “

It is a tribute to both the band members’ fidelity to bluegrass tradition and to their songwriting ability that it would be possible to listen to the disc without realizing that the material is all newly written. The album is excellent – Allmusic.com.

Blue Highway has always been known for their ability to create striking original music that resounds with timeless bluegrass, but Sounds of Home is especially rich in the variety of directions that it reaches.  Having previously released 9 highly acclaimed albums, the members of the band – Tim Stafford (guitar, vocals), Wayne Taylor (lead vocals, bass), Shawn Lane (tenor vocals, guitar, mandolin, fiddle), Rob Ickes (Dobro, Scheerhorn acoustic slide guitar), and Jason Burleson (banjo, guitar, mandolin, bass vocals) – are some of the most accomplished and exciting musicians in bluegrass today.  Each member is among the most distinguished performers on his instrument of choice, and the band has garnered numerous awards from IBMA and SPBGMA, two Grammy nominations, and a Dove Award.

Blue Highway fuses tradition with progress to create their own unique and timeless style, and they sing and play together like the family they are, after 17 years of recording and touring together.