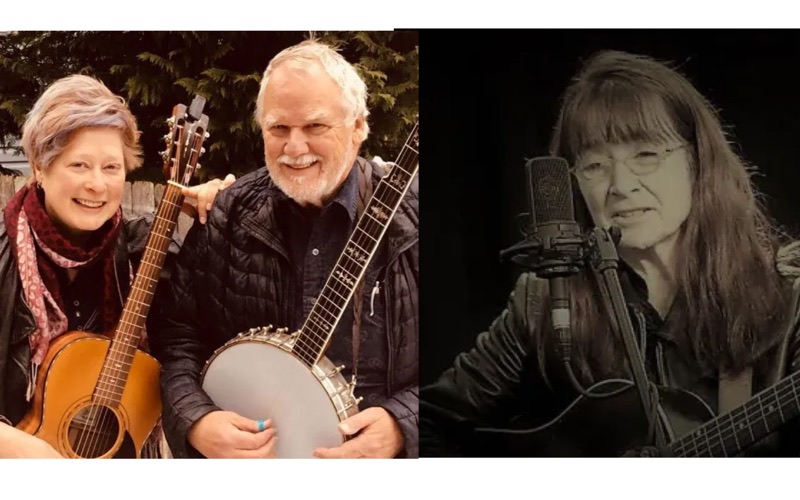 That night (8/11) they will be in concert at Mountain Pickers Association, Ferntree Gully Bowls Club at 7.30. Then at the following festivals – Dorrigo, Mountaingrass, and Warrina plus a tour of Tasmania.

Their biography are listed below and you can learn more of this trio here.

One of the most respected players in old-time music today, Beverly Smith is in demand as a singer, song writer, fiddler and dance caller, as well as a banjo, mandolin and guitar player.

Besides her highly praised recordings of early country duets with Carl Jones, Alice Gerrard and John Grimm, her guitar playing has been featured on recordings of fiddlers Bruce Molsky, Rafe Stefanini, Tara Nevins and Matt Brown, and her singing with Mick Moloney, John Doyle, Laurie Lewis and others. Along with June Drucker, Rose Sinclair and Tara Nevins, she was a founding member of The Heartbeats Rhythm Quartet. She played for many years with Bruce Molsky and Rafe Stefanini as Big Hoedown, and with Rafe, John Herrmann and Meredith McIntosh as The Rockinghams.

Beverly Smith is known as a thorough, humorous, kind and patient teacher and has taught guitar, fiddle, singing and dance at Ashokan Southern Week, Augusta Heritage, Swannanoa Gathering, Blue Ridge Old-Time Music Week, Festival of American Fiddle Tunes and Summer Acoustic Music Week as well as Sore Fingers UK; Haapavesi, Finland; Nimble Fingers, British Columbia; and La Fuente del Musica in Spain.
She has been a featured guest on A Prairie Home Companion, ETown, Mountain Stage and Voice of America, has toured extensively in both the US and the UK, and has played concert halls and festivals all over Europe, Canada and the US.
Her guitar playing was featured in the October 2000 issue of Acoustic Guitar Magazine. She co-directs the Roots of American Music Week in Mars Hill, N.C and is happy to call Marshal, NC home.

About Kellie Allen and Pete Peterson:

Kellie and Pete have been harmonising and making music together since 2000. They love deconstructing an old-time or early bluegrass song or tune from the original recording and turning it into their own music. They can be found during festival season in the middle of jams at Mt. Airy, Clifftop, Lake Genero and other festivals, and hosting workshops at their house in Oxford, Pennsylvania, the home of old-time greats Olabelle Reed and Kilby Snow.

Since 2003 they have been members of a five-piece band, the Orpheus Supertones (with Walt Koken, Clare Milliner and Hilary Dirlam), which has toured extensively in the United States, Australia and Europe.