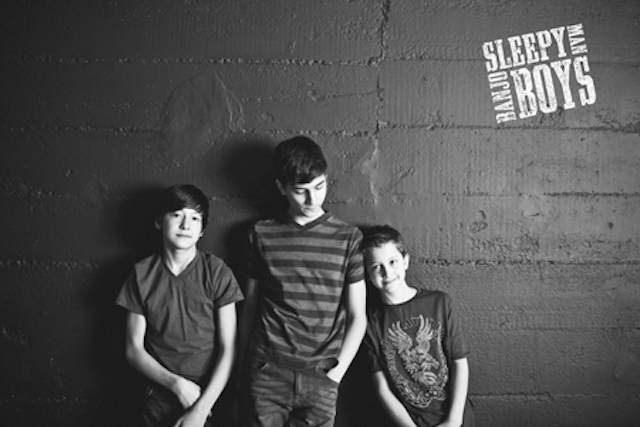 Fresh off the sacred stage of the Ryman Auditorium where they kicked off a stirring tribute to the late Earl Scruggs with actor Steve Martin, the Sleepy Man Banjo Boys are pleased to announce the release of their new album, The Farthest Horizon. The album debuted at #3 on Billboard’s Top Bluegrass Album Chart last week and is now available at iTunes, Amazon, SleepyManBanjoBoys.com and more outlets.

The Sleepy Man Banjo Boys, a bluegrass trio of brothers, became an overnight sensation in 2011 after practice recordings for their grandparents went viral on YouTube.  These videos have now collectively topped over 12 million YouTube views.  Tommy (Guitar), age 15, Robbie (Fiddle), age 13 and Jonny (Banjo) age 10, were encouraged by their parents to learn an instrument and first discovered their love for Bluegrass music by watching Earl Scruggs pick his five string on YouTube. Since then, the Sleepy Man Banjo Boys have developed a style and sound that is uniquely their own and as a result of their viral, virtually overnight success, their talent has been showcased on national television shows, including CBS’s The Late Night with David Letterman Show, NBC’s The Today Show and Fox’s Huckabee.

The Farthest Horizon is poised to follow the success of their debut album America’s Music, with 11 fresh tracks, seven of which were penned by the boys themselves. Two of the songs on the new album also feature the beautiful and authentic voice of 13-year-old Ashley Lily, granddaughter of the late bluegrass legend Everett Lily.

In support of the album, the Sleepy Man Banjo Boys will be traveling coast to coast visiting with the media, radio broadcasters and fans. Their next performance will be on the grand stage of Carnegie Hall for a special performance for Kate Winslet’s Golden Hat Foundation benefiting autism research.

The Farthest Horizon is a six panel digipak and includes descriptions of the songs and some fun behind-the-scenes album facts.  For more information, song titles and to sample tracks from the new album, visit Sleepymanbanjoboys.com.