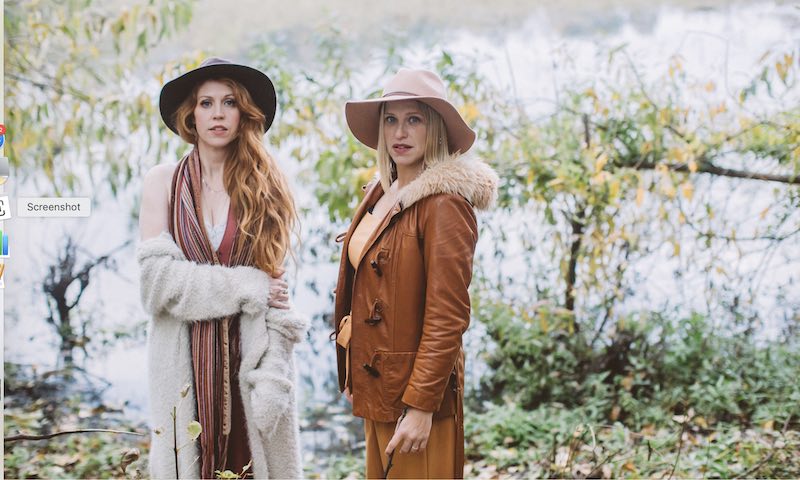 Siren Songs (the musical collaboration between Merideth Kaye Clark and Jenn Grinels) just released its first album, the eponymous Siren Songs, on 29th May this year. Even though the Americana-folk duo has been live streaming, the fact that they have been unable to tour or play album release shows in the traditional manner due to the pandemic left them frustrated.

The duo has planned a “digital tour” beginning 20th July, where a series of five acoustic video performances will premiere at different press outlets as digital tour stops. Fans can follow along with the pair as they “travel” from outlet to outlet and premiere exclusive performances of songs from their new album. Clark and Grinels also plan to open up their tour scrapbooks and will share stories, music, and photos on social media from their time on the road together over the years as they travel on their “virtual tour bus” in-between stops on the digital tour.

The schedule for their digital tour is as follows:

We miss performing live. We miss traveling and being with people. But it’s our job as artists to process life, make things, and share it with the world. This virus has devastated our industry and made it necessary to be even more creative. And necessity, I hear, is the mother of invention. We are really looking forward to this opportunity to try something new, fun, and personal with our fans – Merideth Kaye Clark.

Recorded by David Streit at The Hallowed Halls (Portland, OR) and Bryan Daste at Dream Tree Studios NW (Portland, OR), their new album features a mix of both original songs written by Grinels (Goodnight Sun, Hello Moon, 100  and Gray) as well as a selection of folk and Americana favorites (Jolene, Edelweiss, Chelsea Morning, Angel from Montgomery, For Good and Time After Time). Powerhouse vocalists, musicians, and national touring artists, the longtime best friends showcase gorgeous harmonies and unique arrangements performed on a variety of stringed instruments (banjo, dulcimer, viola) on Siren Songs.

An award-winning songwriter, Grinels has spent the past decade performing her original music on the road, touring with 10,000 Maniacs, Christopher Cross, Marc Cohn, Edwin McCain, and Marc Broussard, and sharing stages with Howie Day, Dar Williams, Berlin, Kevin Bacon & The Bacon Brothers, Rhett Miller, Carbon Leaf, Tony Lucca, Brendan James, The BoDeans, and many more. She has also headlined concerts from coast to coast and abroad. As an independent artist, Grinels has built a large, grassroots following and sold over 20,000 albums. Last year, she was commissioned to compose a musical for B-Side Theatricals in NYC. Goodnight Sun, Hello Moon is the first release from the score. Her music can be heard on television and in film. Grinels dove headfirst into musical theatre and was in rehearsals and shows as early as 5 years old. Later, she found joy in writing music, particularly her own, both in a band setting and as a solo artist. “Performing gave me the greatest sense of fulfillment,” Grinels says. “I’ve always felt like this is who I am, and like this is what I was supposed to do since I was 3 years old.”

Clark is a multi-instrumentalist and composer, as well as an accomplished leading lady in theater. She has played definitive roles nationwide, such as Elphaba in the national touring company of “Wicked” for three years, as well as Eva Perón in “Evita,” Nancy in “Oliver!,” Alice in “Bright Star,” Cathy in “The Last Five Years,” and Clara in “Light in the Piazza.” Clark has toured the US and Canada performing her acclaimed concert “Joni Mitchell’s BLUE.” She can be seen on the television show “Portlandia,” as well as IFC’s “Documentary Now! Co-op,” for which she is featured on the Emmy-nominated cast album. She was nominated in 2020 for a Henry Award by the Colorado Theatre Guild in the Best Actress in a Musical category for the role of Alice in “Bright Star.” Clark started playing piano when she was 3 years old and has picked up a new instrument every few years since. She plays anything with strings, most notably viola, guitar, banjo and dulcimer. “I don’t remember a time when I wasn’t making music,” Clark says.