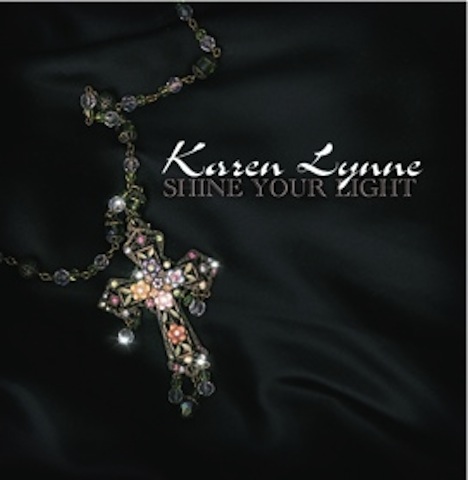 Last year Karen Lynne told us of her plans to record her new album in the USA. This is a growing trend for Australian Bluegrass artists and one that seems to be paying dividends.

Karen Lynne and her band performed several tracks from this her latest Bluegrass Gospel album Shine Your Light at this year’s Harrietville festival.  Sadly, the CD was not available for distribution at the festival but the reaction from the audience to the new songs was enormously encouraging.

I think it’s wonderful, quite possibly the best thing I’ve ever done. This was truly the best recording experience I have ever had and we are going to try our hardest to get back there in a few years and do it all again. Musically it is the best album I’ve ever made.
I left Jerry and Chris Latham to mix and master the tracks (after our recording sessions) and it was sheer joy receiving the final versions. Special mention (should be made) here to Rebekah Long, our studio engineer who soldiered on for a solid week often until the early hours of the morning. Never flustered, never faltered, never tiring.
Jerry was a lovely man and wonderful to work with. It was the best recording experience ever for me.
In closing I have to say (Shine Your Light) it’s really is a great album – far better than I could ever have imagined. I hope all of you who give it a chance, agree!– Karen Lynne.

We asked Karen about the new album and sought some insight into the background of the album and it seems that his is likely to be her most adventurous project to date.

Karen was contacted by Tom T & Miss Dixie Hall last year and they asked her to contribute a song to the ‘Daughters of Bluegrass’ project  ‘Pickin’ Like a Girl’. Karen mentioned that she had planned to travel to the USA later in the year to record a Bluegrass Gospel album. So they invited her to record at their studio Karen and family travelled to the USA to met up with Tom T. Hall & Miss Dixie to record their new CD in their studio. Karen cites their overwhelming support during the process.

Well known producer Jerry Salley took up production role on the album Shine Your Light, although he was already committed to the release of his own album, Showing My Age.

Two of the tracks on the new CD Shine Your Light are from the pen of Mr. Tom T and Miss Dixie and feature Marty Louis on banjo. Karen was especially taken by the quality of the musicians who appear on the new album . These were some of America’s most noted Bluegrass musicians at work. The credit list includes Randy Kohrs on Dobro; Josh Williams on guitar; Aaron McDaris & Martin Louis on banjo; Mike Bub on bass and Tim Crouch on fiddle and mandolin.

Karen says that Jerry Salley had worked incredibly hard to make this album great and along with his great singing, the album also includes Val Storey’s beautiful backing vocals and two special features. The first is a great duet with Bluegrass Gospel singer Daryl Mosley (Josh Williams Band). Karen met Daryl several years ago at the Cherokee Bluegrass Festival and asked him then to do this duet – definitely worth the wait.

Also on the new album Karen has recorded a version of the famous Dolly Parton song ‘Coat of Many Colours’ which she felt would lend itself beautifully to a bluegrass arrangement. Karen was surprised to learn that Mis Dixie had arranged to have their good friend (Dolly Parton’s younger sister & well-known Gospel singer) Stella, to  feature on the song which was written about her mother. Karen reflects on the incredible generosity shown to her from someone she didn’t even know.

Tracks from the new album can be listened to on Karen’s website.