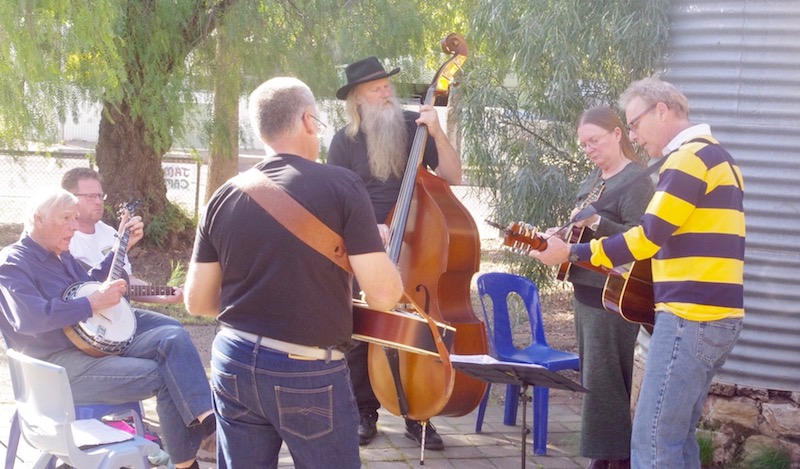 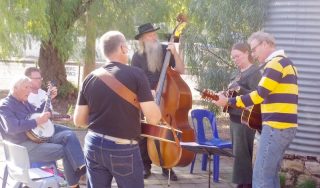 Regular bluegrass jam sessions have kicked off in South Australia in the Adelaide region on the first Sunday of the month session in March.

The inaugural session kicked-off at the Semaphore RSL with twenty pickers in attendance. Musicians included a mix of all bluegrass instruments – banjo, mandolin, Dobro, bass, guitar and fiddle. There was a mix of playing abilities from beginner to more accomplished players that all went with the flow. They played a wide variety of bluegrass standards.

The Adelaide region Bluegrass Slow Jam sessions are being held the first Sunday of the month from 2:00pm – 4:30Pm at the Semaphore RSL at 10 Semaphore Road, Semaphore. A gold coin donation to assist returning service men and women is appreciated.

Michael Murphy has been a regular attendee to the South Australian bluegrass jam camps run by Jam Camps Australia under the tutelage of Pete Wernick* from the USA. His enthusiasm for bluegrass music and jamming has seen him flourish and energised his efforts towards a new opportunity for South Australian jammers.

Jam Camps Australia host annual jam camps in several states across Australia. Previous jam camps have included Queensland, Victoria, South Australia and Western Australia. All of the past jam camps have been very successful in teaching people to play bluegrass music in an informal jam environment. So successful that several people such as Michael Murphy have taken up the challenge to start their own slow-jams, encouraging others to play bluegrass music at their own level with others.

* Pete Wernick runs several jam camps across the USA and has a host of qualified instructors world-wide who deliver his highly successful program for learning to jam.