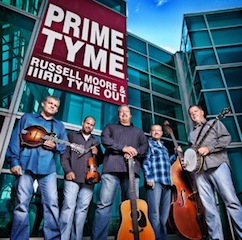 Rural Rhythm Records has advised us that Russell Moore & IIIrd Tyme Out have received a nomination by the GA Music Awards in the Americana/Bluegrass Band of the Year category.  The winners will be announced at the inaugural 2012 GA Music Awards Show to be held 16th June, 2012 at The Buckhead Theatre in downtown Atlanta, GA.  Originally from Pasadena, Texas, four-time IBMA Male Vocalist of the Year, Russell Moore has lived in Cumming, GA for the past 21 years and leads the multi-award winning IIIrd Tyme Out – a band that certainly continues their reign as one of the top performers in bluegrass music today.

The purpose of the GA Music Awards is to spotlight the music industry development in Georgia, encouraging growth in music’s present and future and focusing on the hottest music and artists in the Peach State.  For more information, please visit GAMusicAwards.com.

Russell Moore & IIIrd Tyme Out are celebrating their 20th anniversary with a hit new album, Prime Tyme, which made its debut last November at #8 on Billboard Magazine’s Top 10 Bluegrass Album Chart.  The album is #1 on the March 2012 Bluegrass Music Profiles Magazine’s Top 10 National Bluegrass CD chart with an amazing three songs on the publication’s Top 30 Hot Singles Chart: Pretty Little Girl From Galax at #3, If Your Heart Should Ever Roll This Way Again at #8, and Old Kentucky Farmers at #17.

Rural Rhythm Records will soon release a new music video for the band’s song, Pretty Little Girl From Galax that was recently filmed on location in Galax, Virginia.  Fans can check out a recent article in Bluegrass Today to see photos from this video shoot.