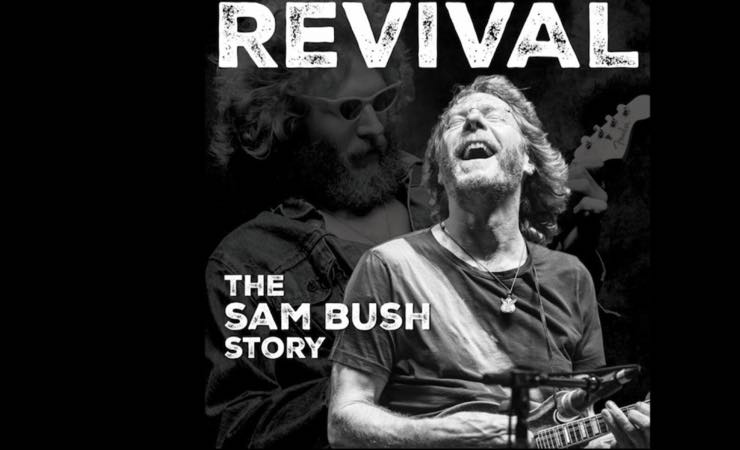 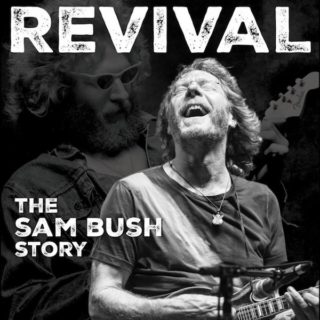 Revival: The Sam Bush Story is to be made available digitally from 1st Nov. via Amazon.

There was only one prize-winning teenager carrying stones big enough to say thanks, but no thanks to Roy Acuff. Only one son of Kentucky finding a light of inspiration from Bill Monroe and his Blue Grass Boys and catching a fire from Bob Marley and The Wailers. Only one progressive hippie allying with like-minded conspirators, rolling out the newgrass revolution, and then leaving the genre’s torch-bearing band behind as it reached its commercial peak. There is only one consensus pick of peers and predecessors, of the traditionalists, the rebels, and the next gen devotees. Music’s ultimate inside outsider. Or is it outside insider? There is only one Sam Bush.

Sam Bush has released seven albums and a live DVD over the past two decades and in 2009, the Americana Music Association awarded Bush the Lifetime Achievement Award for Instrumentalist. Punch Brothers, Steep Canyon Rangers, and Greensky Bluegrass are just a few present-day bluegrass vanguards among so many musicians he has influenced. His performances are annual highlights of the festival circuit, with Bush’s joyous perennial appearances at the town’s famed bluegrass fest earning him the title, “King of Telluride.”

Finally for fans everywhere, the documentary telling Bush’s full story, Revival: The Sam Bush Story, will be released digitally on Nov. 1 via Amazon to rent or buy.

Revival not only chronicles the life and career of the newgrass creator, but weaves an emotional, inspiring story about the risks and rewards of being a musical iconoclast. Since its debut at the Nashville Film Festival in 2015, winning the audience award for Best Music Documentary, the crowd-pleasing film has played to packed houses and standing ovations at independent film festivals (Sidewalk Film Festival, St. Louis International, Big Sky, Noise Pop, IF Film, Durango, Port Townsend, Woods Hole, and Hurricane) across the country and has screened at IBMA, Telluride, Film Falmouth, and Hear BG, picking up three more best documentary awards along the way.

The film opens with an especially poignant interview with Chris Thile commenting on the pressure placed on Bush by bluegrass traditionalists at the beginning of his career who looked at him to be the next Bill Monroe, to which Thile, speaking freely, says Bush had the courage to say “No, I’m going to be the first Sam Bush.” In the film, noted musicians – from Alison Krauss to John Oates, from the Avett Brothers to Thile – say many of today’s biggest acts in bluegrass, newgrass, Americana and the jam-band scene owe a debt of gratitude to Bush. Performance footage, intimate interviews with the industry greats, and candid conversations from Bush, and his wife/business partner Lynn, make for an enjoyable inside look at one of the nation’s greatest musical treasures, the hurdles he faced, the boundaries he effortlessly broke and his triumphs across genres.

The film remembers Bush on a Bowling Green, Kentucky cattle farm in the post-war 1950’s – an only son, and with four sisters. His love of music came immediately by his father Charlie who envisioned his son someday a staff fiddler at the Grand Ole Opry. The narrative unfolds with teen fiddler Bush, a three-time national champion in the junior division of the National Oldtime Fiddler’s Contest. In the spring of 1970 attended the Fiddlers Convention. There he heard the New Deal String Band, taking notice of their rock-inspired brand of progressive bluegrass. A game changer for Bush.

In the film, Bush recalls when country titan Roy Acuff offered him a spot in his band, which he politely turned down. It was not the music he wanted to play. He had discovered electrified alternatives to tradition in the Osborne Brothers and manifest destiny in The Dillards.

Viewers will see the photo of a fresh-faced Bush in his shiny blue high school graduation gown, circa 1970. The next day he was gone, bound for Los Angeles. He got as far as his nerve would take him – Las Vegas – then doubled back to Bowling Green. “I started working at the Holiday Inn as a busboy,” Bush recalls. “Ebo Walker and Lonnie Peerce came in one night asking if I wanted to come to Louisville and play five nights a week with the Bluegrass Alliance. That was a big, ol’ ‘Hell yes, let’s go.’”

Bush played guitar in the group, then began playing mandolin after recruiting guitarist Tony Rice to the fold. Following a fallout with Lonnie Peerce in 1971, Bush and his Alliance mates, Ebo Walker, Courtney Johnson, and Curtis Burch, formed the New Grass Revival, issuing the band’s debut album New Grass Revival. Walker left soon after, replaced temporarily by Butch Robins, with the quartet solidifying around the arrival of bassist John Cowan.

Shunned by some traditionalists, New Grass Revival played bluegrass fests slotted in late-night sets for the “long-hairs and hippies.” They garnered the attention of Leon Russell, one of the era’s most popular artists, and in 1973 Russell hired New Grass as his supporting act on a massive tour that put the band nightly in front of tens of thousands. The group released five albums in their first seven years, and in 1979 became Russell’s backing band. By 1981, Johnson and Burch left the group, replaced by banjoist Bela Fleck and guitarist Pat Flynn.

A three-record contract with Capitol Records and a conscious turn to the country market took the Revival to new commercial heights. In this period, Bush survived a life-threatening bout with cancer, and celebrated chart-climbing singles, earned Grammy nominations, and, at their zenith, called it quits.

Bush worked the next five years with Emmylou Harris’ Nash Ramblers, then a stint with Lyle Lovett. He took home three-straight IBMA Mandolin Player of the Year awards, 1990-92, (and a fourth in 2007). In 1995 he reunited with Fleck and toured with the Flecktones, reigniting his penchant for improvisation. Then, finally, after a quarter-century of making music with New Grass Revival and collaborating with other bands, Sam Bush went solo. Which brings us to today and the reason for Revival and its digital release.

With this band I have now I am free to try anything. Looking back at the last 50 years of playing newgrass, with the elements of jazz improvisation and rock-&-roll, jamming, playing with New Grass Revival, Leon, and Emmylou; it’s a culmination of all that – Sam Bush.

The film is a culmination of “all of that”. Even though Sam is revered by so many music greats he remains something of an unknown legend for the uninitiated. So, for those who aren’t aware of Sam’s story, this will be a discovery film. And, honestly, that,  as much as anything,  is what drew me to this project – Co-director Kris Wheeler..