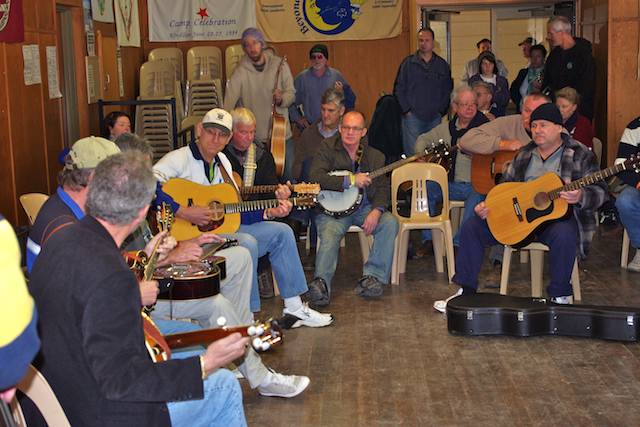 What makes three grown men fly across this large country for a weekend of music?  My apologies to those expecting a punch line. The answer is the Redland’s Bluegrass Convention.

Two colleagues and I flew from Perth to Brisbane to attend the 2011 Redlands convention on 8th to the 10th July thisw year.  For Ed and Jeff it was the third time they had attended this festival, for me it was my second Redlands.  What we love about this event is that it caters perfectly for musicians of all abilities who want to spend a weekend working on their chops, making new acquaintances, and renewing old ones.  Of secondary importance to us is the opportunity to see some of Australia’s best bluegrass bands and one US act.

The venue (about a 40 minute drive from central Brisbane) is a great place to set up picking sessions, either in the hall complete with open fire at night or out in the sun during the day. As was the case last year, the nights were cold but the day time weather was perfect. The workshops catered for all instruments with intermediate and advanced levels, and included a session on jamming etiquette.  On-site accommodation and camping were available, but we opted to stay in a quiet and comfortable motel in downtown Redlands.

We probably averaged eight hours jamming each day, plus a five hour warm-up session on Friday night. I did manage to see the Saturday evening concert which was entertaining and catered for all tastes. The Victorian band Hardrive presented their traditional style of bluegrass, while Coolgrass, also from Victoria, attempted to offend everyone with their comic send ups.  The US act The New Worlds, consisted of four very talented young musicians who pushed the boundaries of bluegrass, and in my opinion fell off the edge at times. Somebody call the bluegrass police.

A funny thing happened the night after we got back to Perth.  Despite the weekend’s musical feast, all three of us showed up diligently to our monthly bluegrass picking club, and Ed asked those present, “Just checking who’s been keeping up their practice. Hands up those who have played more than five hours each day for the past three days?”  Ed, Jeff and I were the only ones.

Hopefully we’ll see all our friends again at Redlands next year – Stephen Loss.