Rebel Announces Home from the Mills 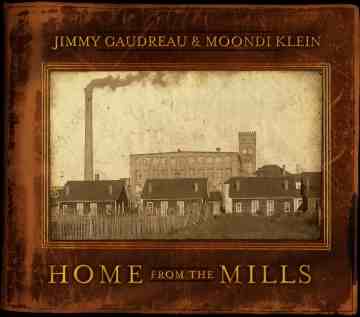 Rebel Records has announced the release of Jimmy Gaudreau and Moondi Klein’s second Rebel recording, Home from the Mills due for release on 8th May 2012.

This duo has been a constant presence on the cutting edge of acoustic music, and their considerable experience includes extensive earlier work with such powerhouse bands as the Country Gentlemen, The Seldom Scene, and The Tony Rice Unit.  It’s really a unique sound—not entirely bluegrass, not folk, and not like the old-time brother duets of the 1930s (The Monroe Brothers, Delmore Brothers, etc.), but a captivating, contemporary duo sound that incorporates touches of these.  They have created a distinctive blend that takes full advantage of Moondi’s wonderful singing and Jimmy’s skills on several stringed instruments: mandolin, mandola, octave mandolin and guitar.

Their new album is packed with a wonderful mix of new numbers, a couple of great instrumentals (Fisher’s Hornpipe and Red Haired Boy medley) and some well-known contemporary songs like If I Needed You and Close The Door Lightly When You Go.

Klein brings his distinctive, soulful touch to the lovely Home From The Mills, New Morning and Shadows. If you are not thoroughly captivated by Moondi’s achingly soulful treatment of the album’s first three songs (Bending Blades, Leaving Nancy and Rod McNeil — two of them written by Tim O’Brien), this probably won’t be your cup of tea.  But it is a gem of an album that brings us another generous helping of some lovely songs and sounds with a fresh new approach.

The connection between Gaudreau and Klein dates back to the mid-nineties, when they joined forces with ace Dobro player Mike Auldridge and T. Michael Coleman to form the supergroup Chesapeake on three albums of top-flight contemporary acoustic music that appealed to most bluegrass fans as well as a larger Americana audience. That group was relatively short-lived as Moondi left to spend more time with a young and growing family. Fast forward to 2007 when some informal picking sessions led to some gigs including a well received tour of England and Scotland. That led to their superb first album entitled 2:10 Train.