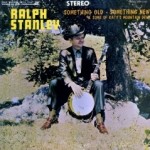 22nd February, 2011 marks a very special anniversary for Rebel Records.  It was on this date forty years ago that Ralph Stanley & the Clinch Mountain Boys walked into Roy Homer’s studio to cut their very first recordings for Rebel Records.  In honor of this occasion, Rebel Records are offering two more Dr. Ralph releases as this month’s installment in their campaign to reissue classic Rebel albums for digital download:  Something Old, Something New and I’ll Wear a White Robe will be available at major digital stores including iTunes and Amazon MP3 on 22nd February.

Tracks Ralph recorded during that February, 1971 Rebel session included several that would make it on to Something Old, Something New and was his second to be released on the Rebel label and the first that included secular material.  The album is perhaps most remarkable for the broad cross section it offers of Clinch Mountain Boys repertoire: straight hard-driving bluegrass numbers like Going to Georgia and Katy Daley, slower-paced songs with powerful harmonies like Will You Miss Me and That Lonesome Old Song, old-time instrumental pieces such as the clawhammer banjo-driven Old Time Pickin’ and a couple sacred numbers including a haunting rendition of Gloryland sung a cappella in quartet formation.

The band on the album features The Clinch Mountain Boys in their classic early 1970s lineup with Jack Cooke on bass, Curly Ray Cline on fiddle,  Roy Lee Centers on rhythm guitar, Ralph Stanley on banjo and the band’s then-newest members – Keith Whitley on lead guitar and Ricky Skaggs on mandolin and fiddle.  Lead singing duties are split between Roy Lee and Ralph.

Released in 1980, I’ll Wear a White Robe was the first album Ralph cut for Rebel after label direction changed hands from Dick Freeland to the label’s current owner Dave Freeman. It was also the first Stanley gospel album to feature the young new lead singer Charlie Sizemore. Tracks such as Mountain Preacher’s Child, Walking Up This Hill on Decoration Day and I’ll Wear a White Robe have since become bluegrass gospel classics. In addition to Stanley and Sizemore, the band’s lineup features Junior Blankenship on lead guitar as well as Clinch Mountain mainstays Curly Ray Cline on fiddle and Jack Cooke on bass.

Stay tuned as classic releases from A.L. Wood & The Smokey Ridge Boys and Bill Grant & Delia Bell are being reissued next month.