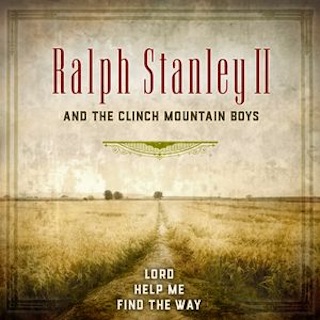 Lord Help Me Find The Way, the first all gospel inspired album from Ralph Stanley II and The Clinch Mountain Boys is released this week on Stanley Family Records.

The initial announcement of the new project caused a lot of emotion and excitement among fans and industry professionals alike. The first single Beautiful Hills of Home, was officially released at the 49th Annual Dr. Ralph Stanley Hills of Home Festival, and debuted at #3 on the Bluegrass Today gospel chart, having received a warm radio welcome and escalated airplay, downloads and streams from all over the world.

Unsurprisingly, the single is thick with the Stanley sound that his father personified all the years of his life. Even the title, Beautiful Hills of Home, sounds like something Ralph and Carter might have sung 60 years ago. – Bluegrass Today

Another highlight of the album, and the second single released as a surprise for Father’s Day this past June, is Between Father’s and Sons. As a touching tribute to the Father/Son relationships and lessons learned over the years between them, a video was produced using pictures of Dr. Ralph Stanley, Ralph Stanley II and also the third generation of Stanley family members, Ralph II’s children, daughter Taylor, and son, Ralph III.

Lord Help Me Find the Way is a thoughtful collection of gospel toned and inspirational songs that Ralph II feels embody a lot of emotion and sentiment that not only he and his family have regarding the life and death of his well-known Father, but also that of the bluegrass community that loved him. He hopes that this album will in a lot of ways, provide a beautiful remembrance and serve as a dedication to Dr. Ralph Stanley and the lessons and memories in music, as well as family and friendship, that he left behind for all of us.

Next year marks Ralph Stanley II’s 25th year in the bluegrass music industry, making music on his own, as a Clinch Mountain Boy alongside his Daddy, and now as the band leader of the Clinch Mountain Boys himself. you can follow the bands tour schedule online here, and follow them on Facebook.

Radio programmers can download the new album Beautiful Hills of Home on Airplay Direct, and it is available worldwide from popular download and streaming distributors.