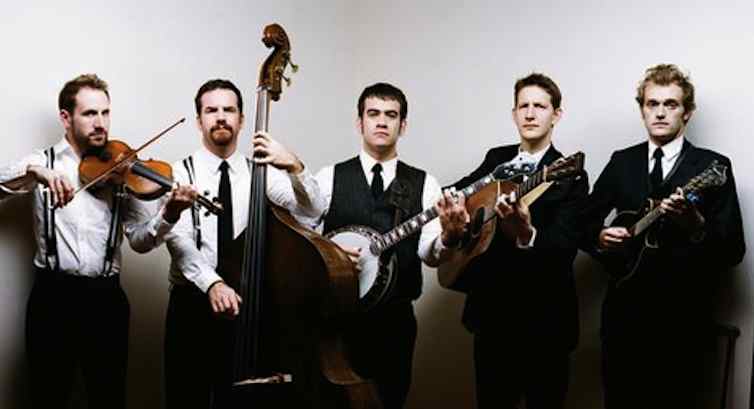 To say I was looking forward to this show is an understatement. The excitement I’d built up for myself from the moment I knew the Punch Brothers were coming to Australia right through to being about the 6th or 7th person in line as The Basement opened its doors on this “Big Time” Wednesday night was palpable. The show was either going to fulfill every single one of my heightened expectations or was going to be the biggest disappointment of the year because I’d built it up so much. The fact this was the first time the Punch Brothers had visited our shores only contributed to my excitement and by the time the music eventually started, a good two hours after I’d entered the venue (to allow for food service) I was teetering on the edge of becoming a quivering mess.

Supporting the Punch Brothers in Sydney were Timber and Steel favourites Packwood. On this night Bayden (Packwood singer, songwriter and banjo player) was joined by a string quartet and flautist and due to the late start managed to play to a capacity crowd – all of which gave Packwood their undivided attention. The band worked their way through much of their current EP – including “Longyearbyen”, “Charlotte”, “Bats” and their cover of the “Game of Thrones Theme”. Bayden seemed a little nervous by the size of the crowd – not to mention having his parents in the front row – but his music was sublime as always. Sadly Packwood were rushed off stage before being able to finish properly but they had definitely kicked off the night in just the way the crowd wanted.

It’s difficult to be discreet entering a stage carrying a double bass so the whooping and cheering began log before the crowd glimpsed Paul Kowert leading the band in from the wings. As the bass player took his up his position at the back of the stage, the rest of the band found their mics and we were away. “Movement and Location” was followed by “Who’s Feeling Young Now” and I knew at that moment I was not going to be disappointed.

An unshaven, slightly disheveled, swaggering Chris Thile, mandolin player and lead singer for the Punch Brothers ran the proceedings for the night, back announcing songs, bantering with the crowd and oozing the kind of charisma normally reserved for the likes of Mick Jagger. This was not sing-around-a-microphone bluegrass – this was bluegrass played with a rock and roll attitude and Thile was our rock star.

There are three types of songs performed by Punch Brothers – the indie-folk of tracks such as “Clara” and “New York City”, the straight up bluegrass and traditional style tunes, and the indie-rock covers. Of the latter we were treated to Punch Brothers versions of songs from The Strokes (a rival New York bluegrass band), Beck and Radiohead – and what I liked most about them was that rather than turning them into bluegrass numbers the Punch Brothers played them straight, recreating the original songs using bluegrass instruments. If you check out their cover of “Kid A” from Who’s Felling Young Now you’ll know exactly what I mean.

While Thile and banjo player Noam Pikelny are often called out as masters of their respective instruments (and with good reason) I feel it’s important to mention just how impressed I was with the musicianship of every member of the band. Gabe Witcher’s fiddle playing was astounding, the seemingly reserved Chris Eldridge tore up the stage with his guitar, the aforementioned Paul Kowert dragged the double bass out of the rhythm section showing his impressive skills both with and without the bow, Chris Thile’s mandolin skills were beyond words and of course Pikelny brought the whole thing together with his banjo, seemingly without breaking a sweat.

The smile on my face as I watch the first ever Sydney Punch Brothers show could well have been the biggest in the room. While I enjoyed every single song it was the more traditional-sounding numbers which excited me the most – when the band finished their set with “Rye Whiskey” (before returning for an encore) I was on my feet shouting “Oh Boy!” along with them every step of the way.

Were my expectations met? Friend, they were blown out of the water.