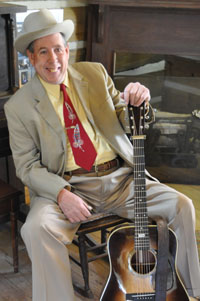 Pinecastle Records has announced that it has signed The Karl Shiflett and Big Country Show. Their upcoming album Take Me Back will be released in mid 2012.

I am excited about our recent signing with one of the most legendary record labels in bluegrass music. As I look forward to our first release I consider it a honor to be a part the Pinecastle artist roster which includes some of the most influential artists known to the genre. – Karl Shiflett.

“Take Me Back features tunes I heard and learned while growing up in Texas in the mid sixties (about 45 years ago),” explains Karl. The material covers songs by Don Gibson, Bill Monroe, Flatt & Scruggs, Bob Wills, Faron Young, Willie Nelson and Floyd Tillman. There are a couple of new tunes, Song on the Jukebox written by Monroe Fields and a gospel song called “Open up your Heart (and let Jesus In)” written by Karl Shiflett.

During their “retro” performances The Karl Shiflett & Big Country Show take the audience on a journey back in time when live radio broadcasts were a mix of music and good humor. Hailing from Texas, KSBC brings their unique blend of classic country and bluegrass music to the stage. The band’s single mic technique (an art in itself), where band members weave in and out of the path of the microphone during vocal and instrumental leads, creates a distinctive musical chorography.

The band’s effort to entertain and keep a classic music art form has not gone un-noticed. They have been recognized with various awards and nominations, including the 2001 IBMA (International Bluegrass Music Association) “Emerging Artist of the Year” award and a nomination for “Entertainer of the Year” the same year. In 2006, they were recipients of the IBMA “Album of the Year” award for their participation in the Celebration of Life album on the Skaggs Family Records label.

KSBC has recorded three previous projects and garnered chart recognition from steady radio airplay. Since 2003 the band has received nationwide exposure on RFD TV as featured guest performers on The Cumberland Highlander Show filmed at Bill Monroe’s Homeplace high on Jerusalem Ridge near Rosine, KY.  In 2008 and 2009 the group appeared on the The Song Of The Mountains television program which is filmed for PBS and aired on 900 stations across the U.S.

Karl Shiflett also carries the distinguished title of “Ambassador of Bean Blossom” at Bill Monroe’s Memorial Park in Bean Blossom, Indiana, the largest and longest-running bluegrass festival in the world (since 1966). The group promotes and spreads the word about this legendary music park and its events throughout their travels.