PA’s Fiddle: The Music Of America 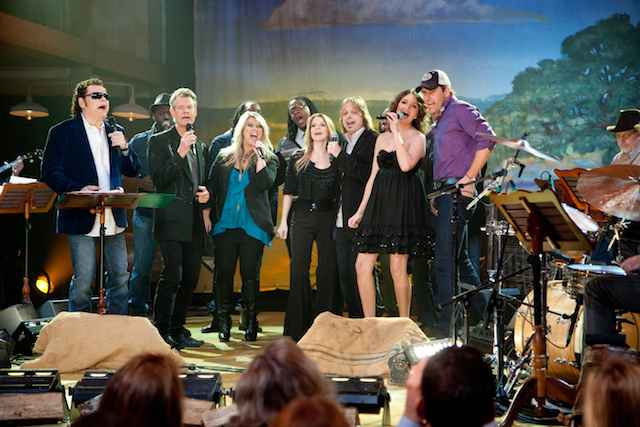 Pa’s Fiddle: The Music Of America Airing Nationwide on PBS in June.

In January 2012, some of country music’s biggest stars gathered to bring the traditional American folk songs written about by Laura Ingalls Wilder in her internationally best-selling series Little House on the Prairie to life. For the first time in concert, this music was performed in front of a rapt, intimate audience at the Loveless Barn in Nashville and filmed for broadcast. The concert will be aired nationwide on PBS throughout June with additional broadcasts scheduled for Fall 2012 and beyond.

Slated for release on 31st July, the concert DVD release contains 14 performances including standouts The Roy’s performance of “The Gum Tree Canoe”, Ronnie Milsap’s “Dixie/The Battle Hymn of the Republic,” and “Roll the Old Chariot Along” by Committed in addition to bonus performance footage from Natalie Grant, discussion of the historical context for Charles Ingalls fiddle music from Dale Cockrell, and a video short entitled: “Little House on the Prairie: the Legacy of Laura Ingalls Wilder.” Also slated for release on 31st July are the accompanying concert CD and a companion cd featuring recordings by Riders in the Sky, Bryan Sutton and Mac Wiseman, among others, performing additional songs from the books.

Little House on the Prairie, the autobiographical book series by Laura Ingalls Wilder, offers the most authentic first hand account of 19th-century American folk music available to us. Seen through the lens of Laura’s father Charles “Pa” Ingalls (1836-1902), a highly acclaimed fiddler of the time, the books offer a window into the music that Americans played, sang and listened to in the late 1800s. The Little House on the Prairie books are among the most popular of all time, with over 60 million copies sold since the release of Little House in the Big Woods in 1932. The much-loved TV show, which was inspired by the books, has been in syndication since its debut in 1974.

You can listen to sound clips of the DVD here.