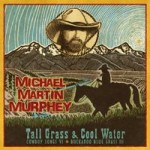 Rural Rhythm Records has announced the brand new single, The Ballad Of Jesse James by multi-award winning and Bluegrass Grammy nominated artist, Michael Martin Murphey.  The song is from the upcoming album, Tall Grass and Cool Water which will be released on 28th June 2011.

The song is part of a James Gang Trilogy feature on the album along with The Ballad of Cole Younger, and Frank James Farewell. This public domain ballad was supposedly written by Bily Gashade, but his identity is a mystery.  The song is a parody of Rally ‘Round the Flag, a popular Union anthem during the Civil War.  Jesse and Frank James grew up on a prairie farm near Kearney, Missouri.  They became the most notorious outlaws in American history, and were compared to Robin Hood by Confederate loyalist after the Civil War.

The Ballad Of Jesse James is now available to all radio stations via Airplay Direct. Stay tuned for upcoming announcements on Tall Grass and Cool Water as Murphey and his Buckaroo Blue Grass friends ride again.  This new project no doubt continues the important connection between bluegrass music and cowboy music that began with the first Buckaroo Blue Grass album and continued with last year’s Grammy® nominated Buckaroo Blue Grass II album.

Here’s a sample of the new track:

The Ballad Of Jesse James