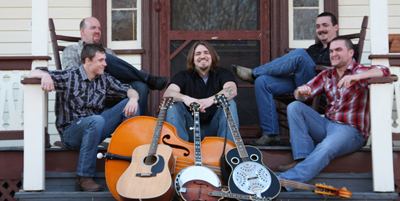 Cumberland River has announced the new music video of their original song Justified from their Rural Rhythm Records album, The Life We Live.
The video was filmed on location in the band’s hometown of Harlan, Kentucky by Anthony Ladd of Kneelindesign who also served as Video Producer. The song, Justified, along with five more original songs were featured on two episodes of the FX Network’s hit drama, Justified (starring Timothy Olyphant) last season with more of their music set to be included in Season 3 premiering 17th January.

The Life We Live has been honored in many year-end charts including: Top 20 Best of Bluegrass – Engine 145; Top 10 BLuegrass Albums of 2011 (Keith Lawrence); and WNCW Radio’s Top 50 BLuegrass Albums.

This is the sound that contemporary bluegrass has been missing.  Blue to the core and grass throughout.  This is what bluegrass music should sound like and Cumberland River is flowing quite well in this regard – Bob Cherry of Cybergrass.

The Justified video includes the talents of Cumberland River members Jamie Dean (lead and banjo); Dustin Middleton (lead vocals and mandolin), Joey Jones (bass); Jamie Stewart (Dobro) and guest Andy Buckner.  Since the filming, Brad Gulley has joined the band on guitar and lead & harmony vocals.  Rural Rhythm Records recently released another music video, Cold & Withered Heart by the group that reached #1 for many weeks on Yallwire’s Top Bluegrass Videos.  It can be viewed  at Cumberland-River.com,

Cumberland River would like to thank numerous people for their contributions for the Justified music video including: the Harlan County Sherriff’s Department; Croley Forester (Marshall); Ben Cornett (walking on sidewalk); Jackie Cornett (being arrested); Deputy Bill Howard; Rex Coal for use of light plant and generators; and the City of Harlan, Kentucky. Joey Jones stated, “I would like to give a special thanks to Anthony Ladd for the incredible video footage and production of this new video.  We are incredibly pleased with the end result.”