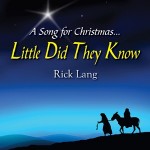 Writing Christmas and Seasonal material has been a passion of mine for a very long time. It goes back to the influences and experiences I had as a child at Christmas in our New Hampshire home. There have been many great songs written about the birth of Jesus that we all long to hear at this time of the year.  That being said, there still needs to be new songs written and recorded that hopefully will appeal to future generations as well.  I want to be one of the writers that helps keeps the Nativity Story alive…. in people’s minds…and hearts –  Rick Lang.

Radio programmers can download the song free at Airplay Direct.com.

Listen to a sample of the track here:

Little Did They Know