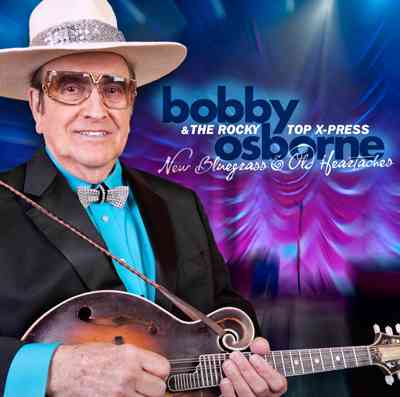 Rural Rhythm Records is proud to announce the release New Bluegrass and Old Heartaches by Bobby Osborne and The Rocky Top X-press.  The album was produced by Glen Duncan, Bobby Osborne and Boj (Bobby Osborne, Jr.) and contains new and old songs that will surely delight Bobby’s fans worldwide and celebrate his impressive 60 year career.

Highlights from New Bluegrass and Old Heartaches include the first single release, I’m Going Back To The Mountain written by Jake Landers who also penned The Old Oak Tree.  A newly recorded Muddy Waters written Phil Rosenthal is certainly another stand out track as well.  The song was originally intended for release on the Osborne Brothers last Decca Records album in the early 70’s, but never released. Other highlights include a wonderful rediscovered song Bobby wrote many years ago titled The Last Bridge You’ll Ever Burn plus a newly written anthem type song titled Born In Kentucky.

Bobby Osborne has been one of the most influential singers and mandolin players in the history of Bluegrass and Country music. He is an American Music Legend.  From his first recorded hit in 1949, to his membership in The Grand Ole Opry in 1964, to Rocky Top in 1967 . He was inducted into the Kentucky Music Hall of Fame in 2002, inducted into the International Bluegrass Music Association’s Hall of Fame (Lonesome Pine Fiddlers) in 2009, and has recorded two State songs – “Rocky Top (Tennessee)” and “Kentucky” (Kentucky).