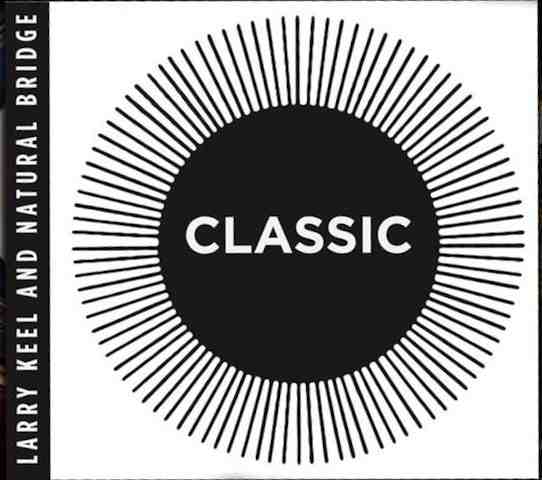 With these gutsy tracks Keel and his ultra-talented progressive string band have crafted a body of work that’s original, fresh and new to the world of Americana and Bluegrass music. 7 of the 10 compositions on Classic are written variously by Keel, his band mates or by close musician-song-writer friends.  The overall result is a recording so full of raw spirit, grit, wit, soaring vocals and jaw-dropping musicianship that it’s easy to see why guitar icon, Tony Rice calls Larry Keel “…a force to be reckoned with”

Keel himself penned 3 of the tunes on Classic and contributed to one other song that the entire band collaborated on together.  Keel’s Love opens the show with a pumped-up rock pulse that sets the tone for the interesting and energizing musical ride to come, rhetorically asking us How bout some love for everyone?  Another of Keel’s originals, I’m No Doctor, is a tongue-in-cheek comparison between his view of establishment intellectualism and home-grown individuality and common sense.  Fishin’ Reel is a polyrhythmic, funky instrumental with an intense, heavy metal-style rock ending.  He lends his heartfelt vocals to a song written by musician-friend, Dave Eakin, called Back Up on the Mountain, a genuine portrait of a world-weary traveler’s longing to return home.  Keel gets hauntingly dark and gritty, singing Dock Bogg’s legendary Country Blues.  And he pays homage to the prophetic poetry and uplifting power of Bob Marley’s music with the gentle, floating version of Put It On.

Natural Bridge’s mandolinist and vocalist Mark Schimick delivers a soulful message in the song written by the band’s musician-friends (Davis, Rodenberry, Faulkner) Take the Time.  Schimick’s rendition of Charles Humphrey’s How Can It Be Wrong is sincere, and representative of the Keel band’s support of local and small farm agriculture. Mark also created the musical framework and chorus for the lovely Goose Lake Dreams, for which every band member wrote a verse, to capture the story of a place very special to the group.

Banjoist and vocalist Will Lee brings his impeccable timing and rich, penetrating vocals to the traditional tune Flora, and the contemporary gospel tune that he co-wrote with James Randolph, Do Unto Others.  His instrumental B-Funk is a wonderfully strange and ‘funky’ foot stomper that adds a sonic twist to the flow of the record.

With Classic, Larry Keel and his band deliver one of the most powerful, expansive performances ever heard in Acoustic American music to date. It’s sure to be an instant ‘classic’!