My Name Is Jimmy Martin 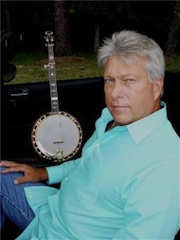 Rural Rhythm Records has announced the new single release, My Name Is Jimmy Martin (Do You Remember Me?) from the upcoming album, Portrait Of a Bluegrass Songwriter by Ray Edwards & Hard Rock Mountain.

Jimmy Martin has always been Ray Edwards’ bluegrass hero, so when Jimmy passed away in 2005, Ray decided to pay tribute to Jimmy in song and tapped his long-time friend Larry Cox to help him co-write the composition.

A brilliantly written song performed by some of the greatest musicians and singers in the business.  I was honored to play snare drum on the session and I know Dad would be proud – said Jimmy Martin Jr.

Rural Rhythm’s first album project which showcased a top songwriter was the IBMA and Dove nominated album Look To The Light: Songs Of Faith By The Pen of Rick Lang.  Although the songs were not under the Sage Brush Music banner the project gave birth to the concept of showcasing top songwriters in special album project format.

Ray Edward’s association with Sage Brush Music is not a new one.  Both have teamed up with great success in the past with the #1 song Hard Rock Mountain Prison (‘Til I Die) by Russell Moore & IIIrd Tyme Out, the gospel hit song Over In The Promised Land by Lou Reid & Carolina, and the current single by Lou Reid & Carolina Carolina Moonshine Man.

Ray Edwards is a two-time world champion banjo player.  He has toured and recorded for over thirty-years with the likes of Randy Travis, Tom T. Hall, Jeanie C. Riley, Ed Bruce, Lynn Anderson, Sammy Kershaw and many more.  Ray’s songs have been recorded by George Jones, Tom T. Hall and more.

Stay tuned for upcoming announcement and an all-star line-up appearing on Portrait Of a Bluegrass Songwriter at RuralRhythm.com.

Radio stations can download the new single at AirplayDirect.com.